George Karl Targeted By Clippers, Could Be Angling For Extension With Nuggets 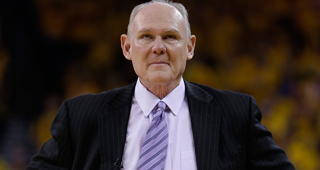 The Los Angeles Clippers are internally discussing the possibility of pursuing George Karl for their head coaching vacancy, according to sources.

Karl is under contract with the Denver Nuggets with one year remaining. The Nuggets also hold an option that would trigger three additional seasons.

Sources say Karl has been eager to discuss an extension with the Nuggets after winning 57 games this season.