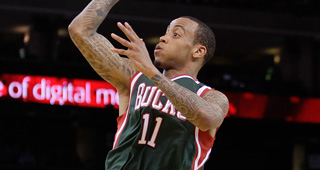 After an increasing belief the Chicago Bulls had been in position to acquire Monta Ellis, the Sacramento Kings have separated themselves as frontrunners to sign the free agent guard on a three-year contract, league sources told RealGM on Tuesday afternoon.

Ellis set up meetings with teams over the weekend and into the week, and he privately believed in recent days that joining the Bulls in a sign-and-trade between Chicago and the Milwaukee Bucks had been a growing possibility. Despite a hard push out of the Bulls, they ultimately couldn’t make the moves necessary to facilitate a potential sign and trade, a source said.

Behind the Kings, Ellis is also considering the Atlanta Hawks and Dallas Mavericks. Yet, all three organizations must complete roster moves to create salary room. The Kings and Mavericks need to move contracts, while the Hawks would have to use Jeff Teague in a sign-and-trade.

The Kings have yet to broach discussion with John Salmons about using the amnesty clause on him, a league source told RealGM. Salmons has two seasons left on his contract, including a team option on the second year.

Ellis, 27, averaged 19.2 points and six assists last season, and he’s pitched himself as an All-Star caliber guard. The Denver Nuggets had emerged as a serious suitor for Ellis last week, but they were unwilling to commit financially.