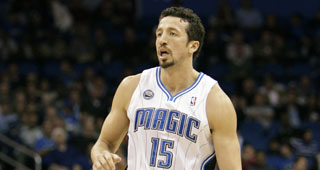 A representative of the Los Angeles Clippers met with Hedo Turkoglu in Orlando in the last two days to discuss whether the sides might sign a contract, according to NBA executives.

Turkoglu was released by the Orlando Magic on Friday and is a free agent.

Doc Rivers has said the team will look to sign a guard due to Chris Paul's injury. Turkoglu is known to possess ball handling ability.