Garnett: Brooklyn Crowd 'Could Do Better' 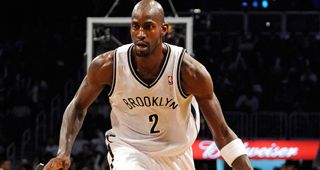 Kevin Garnett and Paul Piece each tried to pump up the Brooklyn Nets' home crowd during Friday's Game 3 win over the Toronto Raptors.

Garnett believes the Nets fed off the crowd but still expected more.

"They could do better," Garnett said on Saturday. "I was expecting Brooklyn to be real hostile, New York-style. I know what it's like to come here as the opposition, so our crowd could do better, but they were there when we needed them, and we fed off of them."

"Well, we know gradually they got into it," Pierce added. "Hopefully the next game, it will get a lot better from the start. We want to come out from the jump, from the beginning, and have them in the game. It shouldn't take a big play from us. We want them behind us. It was a great crowd tonight."