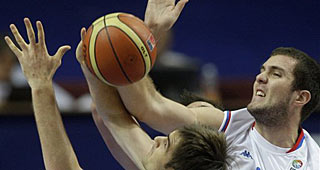 Raduljica had interest from several NBA teams, including the San Antonio Spurs and Philadelphia 76ers, as well as discussions in Europe. With Gustavo Ayon leaning toward a deal in the European League, a lucrative offer in China formalized for Raduljica on Thursday night. Raduljica will become available in NBA free agency when his Chinese season ends in February.

In the Serbian national team’s Silver medal finish in the World Cup, Raduljica starred in averaging 13 points and 4.6 rebounds over nine games.

Raduljica had a strong rookie season in a limited role for the Milwaukee Bucks in 2013-14, averaging 3.8 points, 2.3 rebounds and 54 percent shooting in 9.7 minutes per game. He was released by the Clippers on Aug. 31 after being traded to Los Angeles for Jared Dudley.

Raduljica, 26, played in his native Serbia and the Ukraine before signing a three-year NBA contract last offseason.