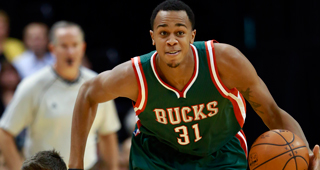 John Henson has gone from an expendable big man with the Milwaukee Bucks to a part of their long-term core.

“We’ve never had any interest in trading John Henson,” says John Hammond, the Bucks’ GM. “He’s the kind of player you want in your organization for a long time.”

Henson has shot 58 percent since returning from injury and is playing a Tyson Chandler type of role in which he sets picks, dives to the rim, dunks lobs and brings defenders away from the Bucks' perimeter shooters. Henson has almost entirely stopped posting up.

The Bucks have been playing Henson almost exclusively in a small-ball lineup with four shooters.