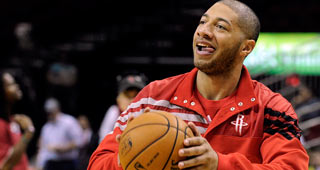 Royce White is closing on a commitment to join the Los Angeles Clippers to make his NBA comeback in the July Summer League, league sources told RealGM.

White has considered interest from several organizations, including the Chicago Bulls, San Antonio Spurs and New Orleans Pelicans, but gained trust with the Clippers’ front office through dialogue with brass members.

White is nearing a commitment to the Clippers, but the 6-foot-8 forward will stay away from signing any sort of free-agent deal in order to showcase himself for the NBA’s other 29 teams. He has spent the year training in Minnesota with trainer Chris Carr.

The No. 16 overall pick in the 2012 NBA Draft, White has logged three games in the NBA with the Sacramento Kings in 2014. Along with the Kings, White has spent time on the roster of the Philadelphia 76ers and his drafted team, the Houston Rockets.

White, 24, was a tremendous two-way talent coming out of Iowa State as a sophomore, but became the league’s face for anxiety issues. Still, White has made clear he has no fear or issues with flying, but rather a previous preference to travel via road when possible.