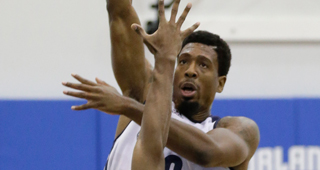 Famous, a skilled 6-foot-11 product, will join the Mavericks with a chance to make the regular-season roster after an impressive summer league with the Washington Wizards. The 27-year-old received significant interest overseas before his agreement with Dallas.

Famous' agent, Daniel Hazan of Hazan Sports Management, committed to the Wizards' summer league invite after a deal in the Philippines — and now has secured his client a contract to return to the NBA.

In four games in Las Vegas this month, Famous averaged 12.8 points, 8.3 rebounds and 57.7 percent shooting from the field. Before summer league, Famous scored 31.1 points and grabbed 24.3 rebounds a night over seven games in the Philippine Basketball Association.

An active finisher, Famous has played in training camps for the Indiana Pacers (2011) and Memphis Grizzlies (2012). He went unselected in the 2011 NBA draft out of South Florida.