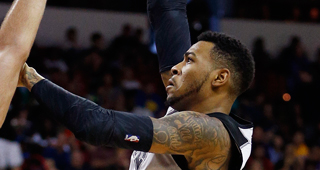 The Los Angeles Lakers and Sacramento Kings are strong under consideration for Moreland, sources said, and their front offices expect the 6-foot-10 forward to settle upon a destination once the final offers are presented. The Kings waived Moreland on July 29 before his contract guarantee date for the 2015-16 season.

Moreland would hold strong chances in roster competitions with the Pistons, Lakers and Kings. Detroit will have several forwards battling for final regular season spots, and Los Angeles and Sacramento have openings with 12 and 14 guaranteed contracts, respectively.

After recovering from shoulder surgery, Moreland had an impressive Summer League in Las Vegas for the second consecutive year. He averaged 6.4 points, eight rebounds and two blocks in 20 minutes per game for the Kings’ entry.

Moreland played three regular-season games for the Kings in 2014-15.

Moreland went unselected out of Oregon State in the 2014 NBA draft. Through workouts and the summer league, the 23-year-old earned a three-year contract with the Kings.