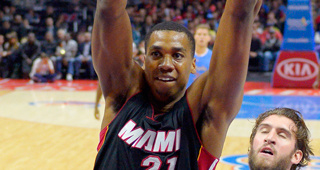 Hassan Whiteside was asked for his reaction to trade rumors centered around him leaving the Miami Heat.

Whiteside said he has greater concerns at the moment than his name appearing in rumors.

"I just saw it. It's just rumors," he said. "I mean, it's just rumors, I guess. I don't really know how factual it is. But I'm just going to keep playing basketball."

Whiteside was linked to possible trades to the Sacramento Kings and Houston Rockets.

"A lot of people are speculating," Whiteside said. "I just keep playing basketball every day. I'm just going to keep coming in and doing the same thing I've been doing."

The Heat are in a unique situation with Whiteside in that they lack his Bird Rights, and therefore would have to utilize salary-cap space to re-sign him.

"I'm not really listening to all that other stuff," Whiteside said. "I'm just going to keep coming out and just playing basketball and keep trying to win games."