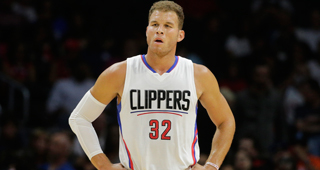 The Los Angeles Clippers are reportedly pursuing a trade of Blake Griffin with a report arriving they offered a package to the Denver Nuggets.

"I've been told the Clippers actually called Denver and offered Blake Griffin and Lance Stephenson for Danilo Gallinari, Kenneth Faried, Will Barton and Nikola Jokic. Denver turned it down because Blake will be a free agent after next season. Plus they like some of those young kids."