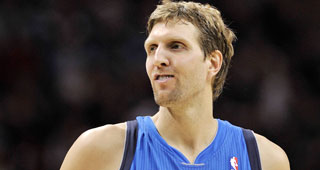 Dirk Nowitzki has thrived since his move to the center position.

Nowitzki was asked about whether he would be comfortable playing the majority of his minutes at center for the rest of his career.

"I'm ready for everything, whatever it may be," said Nowitzki. "I think there's a few dominant forces at center that I'd rather not see, but other than that, we all know that it's not a post-up league anymore. It's a pick-and-roll league, it's a movement league, it's a transition, line-your-guy-up, drive-it league. The league has gone smaller and smaller and smaller, so if that's an option for us, great."

According to data from nbawowy.com, Nowitzki has averaged 24.9 points and 11.1 rebounds per 36 minutes as a center.

The Mavs have outscored their opponents by 69 points in 215 minutes with Nowitzki as the big man.