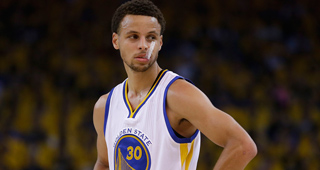 Joe Lacob had an extended profile in New York Times Magazine in which he said the Golden State Warriors' methods were "light years ahead" of other teams.

Lacob also said that what they were doing went beyond Stephen Curry, who has become one of the league's unquestioned best players.

“Yeah, uh, very interesting development,” Curry said with a wry grin when asked about the story. “Joe texted me right after the story was released, kind of explaining where he was coming from, what he meant to say, this and that. So I would assume the reason he texted me was not just to have a cover-up but more the respect of, like you said, we’re out here playing every single night and trying to put our team and our organization in the best position we can, win as many games as we can, as many championships as we can, and build that credibility as we go forward.

“Obviously a lot goes into it. There’s Joe and (co-owner) Peter (Guber) spending the money, and having the right intentions, and building. Hiring the right people to make the decisions, and (general manager) Bob (Myers) in the front office doing what they’re doing with roster choices and decisions, things like that. The coaching staff, and what buttons they push on a night to night basis and then obviously it ends with us players going out and doing what we do on our end of the floor. So we talked about it.”

Curry received the text from Lacob before he even had a chance to read it.

“I didn’t even know about (the story), so I didn’t have time to really have a reaction,” Curry said. “But one, you don’t want to disrespect the teams like the Spurs and the Lakers, franchises that have obviously won multiple championships and established that top tier kind of winning mentality every single year and you know they’re going to be around. We want to be that team. We want to be that franchise. We have some work to do, and obviously we’re on the right path. But we have to be ourselves in the whole process, and not really worry about speaking (about) more than what we’re doing out there on the floor.”