Dirk Nowitzki Pushed For Mavs To Trade For Rajon Rondo 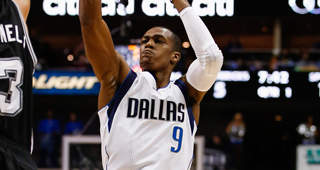 The Dallas Mavericks traded away Jae Crowder, Brandan Wright, Jameer Nelson and a future first round pick to the Boston Celtics for Rajon Rondo in a deal that has become one of the worst moves in the NBA in recent memory.

Nelson was not giving the Mavericks adequate minutes that season at point guard and Dirk Nowitzki pushed for the trade.

"The Rondo deal, that's the one that stands out," said MacMahon on the Dunc'd On Podcast with Nate Duncan. "Rick Carlisle told them he did not want him. He said he was going to kill the spacing. He said Rondo is going to be a really bad fit. But essentially what happened there, and Rick stood down once he understood this, Dirk wanted the deal done. Dirk has traded for two point guard during his time. He's traded for Jason Kidd; that one helped deliver a championship here. Got off to a rocky start but certainly ended up with a ring. He made one great deal for a point guard while the Rondo trade was a total disaster."

Rondo was benched by the Mavericks after Game 2 of their first round series against the Rockets.