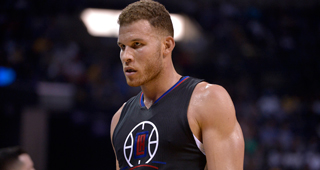 Blake Griffin will be a free agent for the first time this offseason and the Los Angeles Clippers want to re-sign him. The Clippers will also contend with the free agencies of Chris Paul and J.J. Redick.

Griffin is out for the playoffs with a toe injury.

"Griffin is still a significant part of the Clippers' future. Management remains committed to signing him to a long-term deal this summer, league sources tell me," said Adrian Wojnarowski in a video essay.

"In a lot of ways, Griffin has been most loyal to the Clippers' brand. He has never had wanderlust, never floated ideas about leaving town. Truth be told, he's accommodated Paul in every way. Broadened his own game, grown as a leader and taken a lot of unfair finger pointing and blame once the All-Star point guard became the face of the franchise."

Wojnarowski also said "it's hard to imagine a split with Griffin."