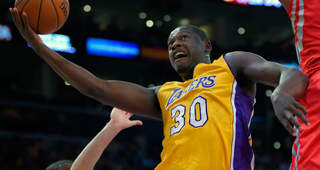 The Los Angeles Lakers are preserving their cap space for the summer of 2018 to pursue multiple max contract free agents. Julius Randle is unlikely to be part of their plans beyond the current season.

"One player whose future is very unlikely to continue with the Lakers is Julius Randle," said Wojnarowski on ESPN. "Rob Pelinka, their general manager, and Magic Johnson, their president, will be faced with this question: Do they look to trade Randle between now and the February trade deadline and get back potentially a first-round draft pick for him, or do they roll the dice and wait until summer when he's a restricted free agent."

Randle will have a cap hold of $12.4 million in the offseason as a restricted free agent.

The Lakers have recently begun to use Randle more at center.