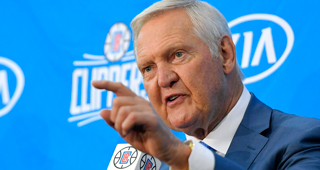 The Los Angeles Clippers are paying Jerry West an annual salary of $4 million to $5 million per year as a consultant.

West previously had a similar role with the Warriors while drawing one of the NBA's highest salaries for an executive.

West was last general manager of a team with the Grizzlies.

The Clippers also added Michael Winger, Trent Redden and Mark Hughes to the front office in the offseason.