Africa Has '10 Embiids Walking Around' According To Masai Ujiri 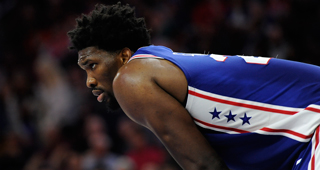 In a recent two-day celebration of his Giants of Africa basketball program, Masai Ujiri stated that there are 10 players with the athletic ability of Joel Embiid in Africa who have never touched a basketball.

"I'm confident to say there are 10 Embiids walking around, there are 10 whoevers walking around in Africa", Ujiri said, while adding that "there are people who have gone through their lives that have that athletic ability who haven't even touched a basketball. They never had the courts, they never had the opportunity. That's why it's a gold mine and people are starting to realize it now."

Ujiri has also been in talks with the NBA and FIBA about starting a basketball league in Africa, although he cites logistical difficulties as a stumbling block.

Embiid and Pascal Siakam were discovered at Luc Mbah a Moute's Basketball Without Borders camp in Cameroon. Embiid played volleyball before picking up basketball at the age of 17.