Marc Lasry: NBA Board Could Vote On Resuming Season 'Early Next Week' 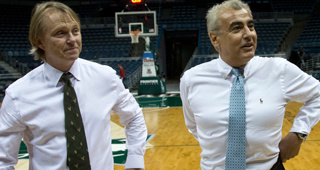 Milwaukee Bucks owner Marc Lasry said that the NBA board of governors could vote on resuming the season "early next week" during an appearance on CNBC's Halftime.

Lasry said that Adam Silver will present "different options" for resuming play on Friday, with the board taking the weekend to consider his proposal.

The Bucks owner added that he believes the season will resume at Disney World, with the biggest question centered around the number of teams that will be allowed to play.

“I think at the end of the day, we’ll be in Orlando at Disney. The question is going to be will we have all 30 teams there or will we have 24; whatever the number will end up being. But hopefully, by the middle of July, we start playing again.”