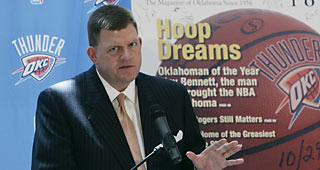 Clay Bennett of the Oklahoma City Thunder delivered an impassioned speech near the end of the NBA's Board of Governors call on Friday asking for the competitive and financial plights of smaller market teams that could be left out of the resumption of the 19-20 season.

The NBA is moving towards a plan of inviting 22 teams to restart the season, but Bennett was wondering if there's a way to safely bring all 30 teams.

Bennett suggested that nine months without games for some teams could have an impact on developing players, cultivating sponsorships and selling tickets in certain markets.

Josh Harris of the Philadelphia 76ers and Robert Sarver of the Phoenix Suns backed Bennett's call for the NBA to come together for as many teams as possible.

"The message was something bigger, reminding people that some teams can't just re-open the doors in nine of 10 months and so easily sell tickets or a sponsorship without having played basketball for that long," one high-level Eastern Conference official on the call told ESPN.