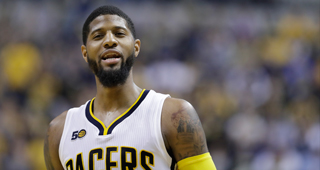 Paul George explained why he left the Indiana Pacers in a Knuckleheads podcast with Quentin Richardson and Darius Miles.

George suggests the best power forward in the NBA in 2017 wanted to join the Pacers to play with George.

“I ain’t gon’ say the names, because I’m going to keep their business private, I’ma just say it like this," said George. "I had at the time, the best power forward saying he wanted to come to Indy and team up with me.

George was disappointed that the Pacers didn't want to make the move that he thought would improve their team.

“So I’m like, now I’m pissed, because it’s like, what am I doing here? You know what I mean? They don’t want to win. I’ve got the best power forward that wants to come play here. Not everybody chooses Indy to come play here.”

George is possibly referring to Blake Griffin or Paul Millsap.

George said he contacted his agent about requesting a trade after that conversation he had with the Indiana front office.