Pacers Open To Trading No. 13 For Player Who Can Contribute Immediately 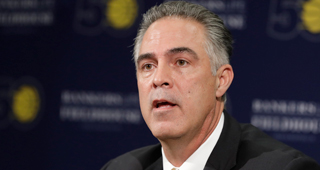 The Indiana Pacers are open to trading out of the No. 13 pick in the draft as they seek a player who can help immediately.

The Pacers will target prospects in the draft who are ready to play rotation minutes in the NBA and if they can't find one, then they'll target a veteran via trade.

The Pacers have discussed a trade with the Houston Rockets for the pick. They would seek a player with at least two years remaining on their contract, which would make Eric Gordon a logical target.

Gordon won't be a free agent until 2024 and is a native of Indianapolis. Gordon averaged 17.8 points, 2.2 rebounds and 2.6 assists in 27 games last season. Gordon was limited to just 36 games in 19-20 as he's dealt with injuries over the past few seasons.