Lakers To Retire Pau Gasol's No. 16 On March 7th 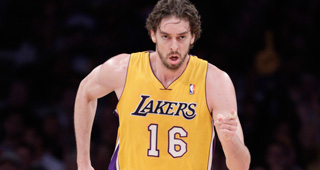 The Los Angeles Lakers have announced they will retire the number 16 of Pau Gasol on March 7th.

Gasol was traded to the Lakers by the Memphis Grizzlies in 2008 and subsequently went on to appear in three Finals with two wins.

Gasol was an All-Star with the Lakers in three of his six full seasons.