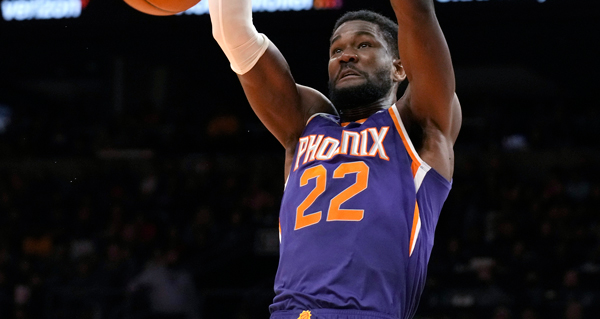 Deandre Ayton said he hasn't spoken with Monty Williams since he was benched during the Phoenix Suns' Game 7 elimination in the second round of the playoffs.

Ayton returned to the Suns this past offseason when they matched his four-year, $133 million offer sheet.

"I haven't spoken to him at all, ever since the game," Ayton told reporters after the first practice of the season on Tuesday. "I can show him better than I can tell him. It's life. Nobody cares about the uncomfortable nature of it, it's how you perform and what you bring to the table. What's said is already said."

Ayton worked out at the Suns facility for weeks leading up to training camp, but Williams said he purposely decided to leave players alone a little this summer to give them space.

"I think 1-on-1s are always needed between guys I've been around for awhile," Williams said. "Some guys need it and some guys don't. I'll identify that as the season progresses. I'll talk to everybody as I always do during camp and it won't be an issue at all."

At a team dinner on Monday night, Williams addressed the loss with the team.

"So much has been made of Game 7 but we addressed that last night as a team," Williams said. "I put it to bed last night."

On Monday, Williams said he believed Ayton could put any lingering issues behind him.

"He's just too good of a player, and he's a good dude," Williams said. "There's times where you bump heads on certain issues, but that doesn't define a person in totality. And I think sometimes that stuff just gets blown out of proportion and rightfully so, when you don't know all the facts."