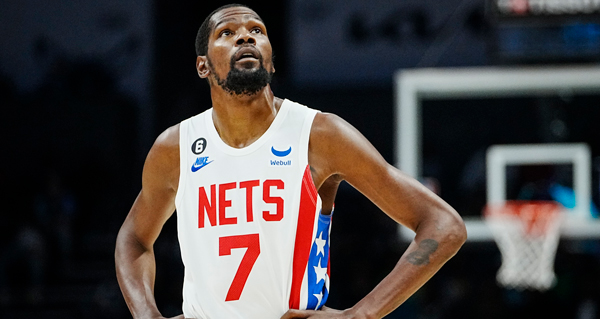 Kevin Durant discussed a lot of topics about the NBA, the Brooklyn Nets, and his offseason trade request in a series of sit-downs with ESPN. On his trade request, Durant said it had no impact on the Nets season.

"This was a summertime thing. We wasn't playing no games. I didn't interfere with what we were doing on the court every day. It wasn't a question of what you were asking my teammates every day after a game or a practice. What I did didn't get in the way of the games that was being played, so I felt like that's the difference in everything. So, we hashed that all up right before camp, and it was cool, it didn't get in the way of the hoops," Durant said.

Durant also said that he and Kyrie Irving were able to move on to have success this season, because they were never not together.

"Because we was together regardless. I think coming into the training camp, we understood that it's going to be a lot on us from a media standpoint, from just the noise in general around our team, so I think that made us tighter once camp started. So, we was able to take the Kyrie stuff and move in stride because we were already stuck together before that," Durant said. "We started to win some games, started to get better as a team, and do some things out there that work for us. And now it seems like everything was patched all together, but it felt like it was always cool, to be honest."