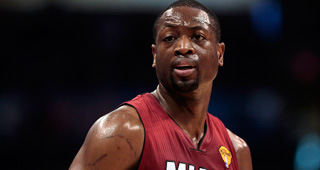 Chicago -- Aside from being Chicago natives, Dwyane Wade and Derrick Rose have much more in common. Both are athletic guards full of grace offensively and became NBA stars early in their careers. Wade won an NBA title and Finals MVP in his third season, while Rose was regular season MVP in his third season. Yet still, Wade and Rose have had their careers hampered by injuries.

After Rose tore his ACL in Game 1 of the Chicago Bulls’ first round series against the Philadelphia 76ers, Wade reached out to his representatives to offer condolences. While the two sides have not yet spoken, Wade understands and respects Rose’s reserved, quiet and private nature. But Wade also is confident that Rose will continue to have faith and will ultimately regain his usual form whenever he returns.

“I feel Derrick will work very hard to getting back to the player he was,” Wade told RealGM on Thursday afternoon during his fifth annual “Wade’s World Weekend” event. “He just has to put in the work, keep believing, and even when it’s hard, he has to know that he can do it.

“I’ve had four surgeries in my life, and I’m still here. So he can do it. It looks dark right now, but he’ll be all right.”

Despite his belief in Rose’s recovery process, Wade has pegged the Bulls as an unknown team heading into next season and is unsure what to expect from the team that has been the top overall seed in each of the past two years. With Rose slated to miss most of the 12-13 season and Chicago dismantling its bench, the Bulls’ stature has dropped in the eyes of many players across the NBA.

Nevertheless, Wade trusts that the Bulls’ organization has a plan moving forward. Wade grew up idolizing Michael Jordan and rooting for Chicago, and more than anything, he believes Tom Thibodeau’s system will give the Bulls a chance to compete against any team in the NBA.

“I don’t know; [whether the Bulls are contenders] has yet to be seen,” Wade said. “This is a great franchise and they know what they’re doing. They’ve been successful for many, many years, so I’m sure they’re always going to be tough and competitive. They have an unbelievable coach and they have an unbelievable system. That gives them an opportunity right there.”

For all the movement around the league this offseason, Wade made it clear that the NBA is in a “very good” place right now. Yes, he knows there are some powerhouse teams on paper, but he stresses the Bostons and Indianas of the NBA will give his Heat hard challenges next season – tests in which he feels Miami will be favorites.

“We’re the defending champions, so to say that we’re not the favorites would be fooling yourself,” Wade said. “But that doesn’t guarantee you anything and we have to put just as hard work as we did last summer to come back this year and compete. I look forward to it.”

For his part, Wade is still recuperating from the knee surgery he underwent on July 9. Although the injury kept him out of the Olympics, he used the free time to strengthen his knee and ensure his readiness for the upcoming campaign. For now, the recovery process has been effective, but Wade admitted his knee still needs further improvement before next season begins.

“My knee is doing well and I’ve been doing everything I can to make sure that I can be strong for next season,” he said. “I still have a long way to go before we get to opening night, but I’m happy with [the progress].”

While Wade spurned the Bulls during the summer of 2010, he hasn’t strayed from his roots. He doesn’t have to be hosting charity events every summer, and yet there Wade was Thursday, lighting up the gym in front of a segment of his hometown’s youth, awarding a team of students for their study skills and speaking about how important reading is – and how much of a “lost art” it has become.

“I’m not here every day, but I’m from here and I understand how this community is: It’s very tough,” Wade said. “For me, I feel my job is to give back and help the kids and then give them an opportunity in life to be able to feel confident in themselves and open up a door for them that they may get a chance to walk through and do some amazing things that can change someone else’s life.”