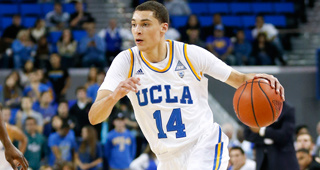 With the NCAA Tournament coming to a close, the annual parlor game as to whether or not the best college players declare for the NBA Draft is in full swing. Some declare too early, others too late. The NBA is a fickle beast when it comes to the draft. Over the course of a player's NCAA career, the league can fall in and out of love with their game for no real rhyme or reason. Money that was there one year can be gone the next.

Few can resist the lure of being taken in the first round and the millions in guaranteed money that comes with it. With so much money on the line, it's hard to blame any top prospect who declares for the draft, regardless if they are "ready" for the next level or not. The developmental track for every player is different - some thrive around their peers in college, others benefit from being in a more professional setting.

Once they get to the NBA, everything changes. At that level, no one cares what a guy did in college or how high they were drafted - every player in the NBA was a star in college. The only thing that matters is how much they help their team in the minutes they are on the floor. For the most part, NBA coaches are hired to be fired. They can't afford to develop young players at the expense of the win-loss column.

An NBA draft pick is like a new car - they lose half their value the second they are driven off the lot. In the months leading up to the draft, teams focus on all the things a player can or could do in the future. In the months after the draft and going into their rookie season, teams start to focus on all the things they can't. While lip service is still paid to potential, the stats are the stats and there's no massaging them.

There's nowhere to hide in the NBA. Everything a player does on the court is exhaustively measured, analyzed and parsed for what it reveals about them. Things which a player could get away with on the college level are ruthlessly exploited at the professional level. People will rush to conclusions at the earliest opportunity - Otto Porter went from can't miss prospect to prospective bust on the basis of a few summer league games.

There's just not much patience at the highest levels of the game from fans or management. With 30 teams and 15 roster spots on each, the supply of young basketball players far outstrips the demand. If a team misses on a pick, there will be another next year. If a young player gets injured or comes up short in some way, there are a dozen guys in the D-League who would kill for the opportunity they have received.

Once a player gets into the league, the clock starts ticking. If a first round pick doesn't start showing something by Year 2, their third-year option might not get picked up. By the end of their third year, the team that drafts them has a good idea of whether they will offer them a second contract. If they get dropped by their first team, they become damaged goods and there's no guarantee they get a second shot.

The money from the rookie deal, meanwhile, slips through their fingers. No matter how much money a young player makes, it's never enough. Friends, family, agents, managers, Uncle Sam - the line of people with their hand out stretches around the block. Keeping up with the Joneses and maintaining an NBA lifestyle swallows up the rest. The things you own, as the saying goes, end up owning you.

The real money, like in most professions, comes once a young guy has paid his dues and moved up the ranks. Even the No. 1 overall pick isn't paid as much as an established veteran on a long-term deal. The second contract is where the real money is made in the NBA - that's the money that can set up a player for the rest of their lives and for the lives of their children. That's the money young players should think about.

The crucial earning years for a basketball player aren't their early 20's but their late 20's, when they are in the prime physically. At that point, it's not about whether they maximized their draft position but whether they developed their game and maximized their earning potential before they start to decline. It doesn't matter whether they are still in the league - the NBA isn't the only place in the world to make a living playing ball.

No matter where a player is drafted, they have to make it or not on their own. They will be cut a lot more slack and given a lot more chances at the college level than in the pros. Some guys are ready for that when they are 16, others are still figuring things out at 25. A basketball career is a marathon, not a sprint. How quickly you get off the blocks won't make a difference when you hit that second mile.

Being drafted in the lottery doesn't vindicate a player's decision to go pro anymore than slipping into the second round means they should have stayed in school. Whether or not they have game and are ready to be professionals will be sorted out in the wash soon enough. Draft position will only take a player so far - there are lottery pick who bust out of the NBA and second-round picks who get max contracts.

Coverage of the draft is like so much else in our society - no one has any patience anymore. Everyone is in a rush to get where they are going without any regard to how they are getting there. Whether a player stays or goes, if they work hard, stay in the gym and keep their ego in check, everything else will take care of itself. Far too many people act like being drafted is the end of a journey when it's really just the beginning.