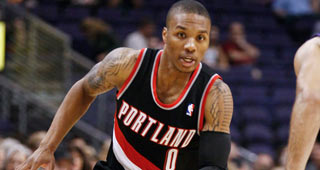 As high school rankings gain added intrigue for college basketball fans in the one-and-done era, I couldn’t help but wonder how often the recruiting experts get it right. Do the stars correlate with not only collegiate success, but professional success as well? Of course there’s the LeBron James and Kevin Durant breeds, both five-stars, but also those who slip through the cracks such as Damian Lillard, a former two-star.

I decided to take each playoff roster and break down how each player was ranked by the Rivals.com database coming out of high school. The database was created in 2002, so any player who came out of high school earlier would not be qualified. As a result, I broke my findings into multiple categories.

First, I made seven categories with 5 Stars, 4 Stars, 3 Stars, 2 Stars, 0 Stars, and a pair of “Not Applicable.” The “N/A (Age)” category described players who graduated high school earlier than 2002 and therefore were not in the database. The “N/A (Int’l)” category was used to differentiate international prospects, who aren’t ranked by Rivals.com.

I then split the NBA players into three groups from this weekend’s set of games: Starters, reserves who played over 10 minutes of action, and the rest of the roster.

What the results showed are that most of the time, the rankings held true. Of the 80 NBA Playoff starters this weekend, 29 were ranked as 5 Stars out of high school. The next highest category was the “N/A (Age)” category, which certainly would have had more 5 Stars if the database had been older. For example, Kevin Garnett, Paul Pierce, David Lee, and Zach Randolph were just some of the McDonald’s All-Americans who likely would have been considered 5 Stars.

Another 12 starters were International prospects, 11 were 4 stars, and seven were 3 Stars. Damian Lillard was the lone 2 Star not only in a starting lineup, but also in the entire playoffs. George Hill and Jimmy Butler were the only 0 Stars be in a starting lineup.

When it came to the reserves who played over 10 minutes and the rest of the playoff roster, the results were fairly mixed. There were more players who were too old for the Rivals database in both categories, while the 5 Stars, 4 Stars, and 3 Stars were somewhat even.

As a whole, the NBA playoffs consists of 51 5 Stars and 50 “N/A (Age).” The next highest category was in the 4 Stars, with 35 total, followed by 29 International prospects and 28 3 Stars. There’s a smaller chance for 2 Star and 0 Star prospects to make an NBA roster, but it’s far from impossible.

It’s safe to say that the recruiting experts usually get it right. Sure, there are some misses, but five star prospects are usually the top NBA talents. There are bound to be some “busts” and underrated prospects who outperform expectations, but the experts are right more often than not. At the same time, it doesn’t mean a 5 Star is guaranteed an NBA deal, or a 0 Star has no shot at earning an NBA contract.

This was certainly an interesting research project, but would be even more interesting 10 years from now when most of the league has a high school recruiting profile. Will there be another Damian Lillard?

-The only starting lineup that consisted of purely 5 Stars was the Charlotte Bobcats. Josh McRoberts was the biggest surprise, who left Duke after his sophomore year, but has has developed into a key piece for Charlotte.

-Houston was the next closest team to have the full 25-star starting lineup, with a total of 24 stars. Patrick Beverly, a 4 star prospect, was the lone starter for the Rockets who wasn’t a 5 Star.

The Complete Results Are Below: