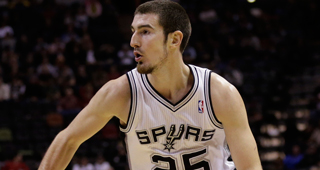 As the 14-15 Euroleague regular season comes to an end, RealGM continues to present the ultimate positional rankings of the league's best players. In the fifth and final edition, we rank the elite point guards from one to ten.

There have been multiple times when Serbian Milos Teodosic received criticism for underperforming in crucial games and not meeting the expectations after winning Euroleague MVP award in 2010. However, 2014 was the year when Teodosic made the leap and became one of the most spectacular players in Europe. The 27-year-old point guard averaged 13.6 points, 2.1 rebounds, 4.4 assists and carried Serbia to the final game of the 2014 FIBA World Cup. Teodosic also demonstrated great range from close distance while he was also making 48 percent of shots from beyond the arc. Teodosic continues his great play in Euroleague too, where, despite missing half of the games due to injury, he averages MVP-worthy numbers.

Sergio Rodriguez was not only the best point guard in the league last season, but undoubtedly the most dominating player overall. Despite not starting in a single Euroleague game during the 13-14 season, Rodriguez won MVP while Real Madrid, which was one game short from winning the title, was the most impressive team throughout the whole season. Nevertheless, this season is a different story as Rodriguez and his team are no longer as unstoppable as they were last year. Rodriguez is not scoring as much as in 13-14, but so far he has been great at involving his teammates and organizing the offense. For example, Rodriguez leads the league in assists per turnover rating (6.7) as he dished out 47 assists while committing seven turnovers in nine games.

Nando De Colo, who missed the 2014 FIBA World Cup due to a fractured hand, spends a lot of time playing shooting guard this season and forms the strongest backcourt in the Euroleague with Milos Teodosic. Teodosic and De Colo combine to score 32.3 points, grab 6.6 rebounds and dish out 10.5 assists for the only undefeated Euroleague team, CSKA Moscow. De Colo’s game in 14-15 might become historical as he is also on his way to join the Euroleague 50-40-90 club. Following the ninth round of the regular season, De Colo's percentages are 57 from close range, 40 from beyond the arc and 95 from the free throw line.

After spending the 13-14 season on CSKA’s bench and averaging five points in 15 minutes, Jeremy Pargo went back where he reached his career peak in 10-11. As he did four years ago, Pargo has a chance to demonstrate his outstanding athleticism, ball-handling skills and leadership. Pargo could be considered a serious candidate to win the Euroleague MVP award this year if he improves his three-point shooting percentage and becomes more consistent. For instance, in two regular season games against his former team CSKA Moscow, Pargo made only four out of 23 shots, while he scored in double figures in just four out of nine games this year.

For the first time in his career, Dimitris Diamantidis averages more assists (5.9) than points (5.4) per game. In his first four Euroleague games, Diamantidis made only two field goals while recording 29 assists. The 34-year-old Panathinaikos symbol has never been an elite scorer, but it is obvious that his career now is in decline. Despite he can still run Panathinaikos’ offense and occasionally shine in a game or two, he averages career-low 5.4 points, makes career-low 25 percent of three-pointers and makes career-low 0.8 steals per game.

The 31-year-old has been one of the Euroleague's most reliable playmakers for the past five years. As this is his contract year, Huertas slightly raised his statistical numbers - points from 8.2 to 9.2, rebounds from 2 to 3.3 and assists from 3.8 to 4.3 - while FC Barcelona traditionally remains among contenders to win the title. Last week’s game against Fenerbahce Ulker was one of the best in Huertas’ career as the Brazilian guard scored career-high 25 points in the overtime loss. No doubt, even at the age of 32, Huertas will be one of the most demanded point guards once he becomes a free agent in the upcoming offseason.

Sergio Llull played an essential role for Real last seson, which started by winning 31 games in a row and was the most dominant team in Europe. However, this season Real does not seem to be unbeatable and Llull is not the one to be blamed for that. Same as last season, Llull starts games at point guard position, but spends a lot of time playing at two alongside Sergio Rodriguez, as he is a big threat from behind the three-point line (44 3FG% this Euroleague season). Lull averages almost identical numbers as in 13-14 and due to his quickness as usual he is capable to contribute more on offensive end of the floor than on defense.

The last four months for 25-year-old Thomas Heurtel were the best in of his career. Heurtel successfully replaced De Colo and became a starting point guard for France in the 2014 FIBA World Cup while he has also made the leap in Euroleague this season, which helped him to climb the ladder and become the eighth best point guard in our ranking. Heurtel, who averaged only one point and 0.9 assist in 2013 EuroBasket, stepped up in 2014 FIBA World Cup, where he averaged 12.6 points and 3.8 assists throughout last five games. One of the best ball-handlers in the Euroleague continues his great performance as he ranks third in assists (6.7) and fourth in three-point shooting (55 3FG%).

Daniel Hackett made a huge leap in his career last season, when he took the challenge to take Bobby Brown’s role for Montepaschi Siena. Hackett carried his team on his shoulders and helped them get three regular season wins while the point guard finished four regular season games with 24 performance index rating (PIR) points or more and was an absolute Euroleague leader in drawn fouls. After joining EA7 Emporio Armani, Hackett’s role decreased due to huge competition among backcourt players, but this year he is the most important player on a team, which already secured a place in Top 16. Hackett gets the most playing time of all EA7 Emporio Armani players (30 minutes) and leads the team in scoring (14), assists (4.3) and steals (1.1).

Despite being 35, Carlos Arroyo still proves himself capable of playing 31 minutes per game as a leading scorer on a Euroleague team. For example, in week six’s game against Crvena Zvezda, Arroyo played all 50 minutes - regular time and two overtimes - without rest and scored a career-high 26 points. Moreover, Arroyo scored in double figures in 23 out of his last 27 Euroleague games and demonstrates that he has plenty left in the tank. Arroyo can be a dominant player if he gets enough freedom, but due to low shooting percentages, he would likely not be as efficient as he is now on a winning Euroleague team.