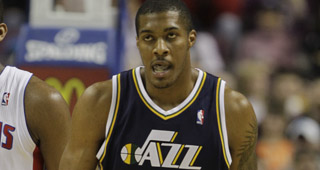 With the NBA Trade Deadline less than a month away, it is a good time to check in on the 10 Most Tradeable Contracts in the NBA. Before we get to the deals, a few ground rules:

All years/salary figures are for money owed beyond the 2015-2016 season.

10. Nik Vucevic (3 years/$36.75 million): Vucevic is a legit 7 foot center at a time when fewer “real” centers exist. His numbers are down slightly this year from last year, but so are his minutes. He is still averaging 17 PPG and 8 RPG. In addition, he’s only 25 years old. He isn’t a great defender or rim protector, but an average salary of just over $12 million dollars a year is great for a guy who can reasonably average 18 and 10 and hold down your center position for years.

9. Marcus Morris (3 years/$15 million): Since being traded to Detroit, Morris has broken out. A fulltime starter for the first time, he’s averaging career highs in points, rebound and assists. His ability to play SF, PF and some small ball C, makes him one of the more versatile frontcourt players in the league. He’s basically a poor man’s Draymond Green. For an average salary of less than the Non-Taxpayer Midlevel Exception, you would struggle to find a more versatile player.

8. Patrick Beverley (3 years/$16.5 million, last year Fully Non-Guaranteed, declines each year in value): Beverley, despite injuries, remains one of the top defensive PGs in all of basketball. His minutes are down this year, but his overall numbers haven’t suffered much. For a player that many knock for being unable to shoot, his career 3 Point % is 37% and this year he’s at 43.7%. He’s an ideal fit next to James Harden, who is the de factor PG for Houston, but many wonder what Beverly could do if he was handed the keys to his own offense. Only owed $11.5 million guaranteed the next two years, Beverly is attractive to any team looking for defense and shooting from the PG position.

7. Isaiah Thomas (2 years/$12.8 million, declines each year in value): Thomas is playing at an All-Star level for the Celtics. As a starter almost all season, he’s averaging 21.8 PPG, 6.6 APG, 3 RPG (all career highs) and he’s getting to the FT line more than ever. He may be 5’9’’ and a liability on defense, but for just over $6 million a year, you would be hard pressed to find more value in a scoring PG. The fact that his deal declines each year, ending at just over $6 million in 2017-2018 make him a piece any team would consider for their bench or starting lineup.

6. Kemba Walker (3 years/$36 million): When Charlotte signed Walker to a four-year, $48 million dollar extension, many questioned that deal at the time. There were concerns about his ability to be a true PG, as opposed to a score-first PG. Walker has quieted those by leading the Charlotte offense while also almost averaging career highs across the board. With several injuries to key players, the Hornets have had to lean on Walker more than ever. He’s responded at every turn and is keeping Charlotte on the fringe of the playoffs in an improved Eastern Conference. $12 million flat a season is great for the kind of production Walker provides.

5. Will Barton (2 years/$7 million): Michael Pina wrote about Barton extensively here for RealGM. Languishing on the Portland bench and barely playing, Barton has exploded since being dealt to Denver last year. Every single stat is up across the board. He brings a ton of energy and creativity to the game the minute he hits the floor. His defense is also solid. Denver locking him up for just over $3.5 million a season is one of the absolute steals in the entire league. If Denver wanted to deal him, every team would make a call.

4. Jae Crowder (4 years/$28 million): Crowder being the most valuable piece from the Rajon Rondo trade is what everyone expected. Ok, it isn’t, but Boston is thrilled to have him. Given more minutes than ever since coming to the Celtics, Crowder has responded in ways no one could have ever expected. Crowder has always been a solid defender able to cover 2-4, it’s his offensive improvement that has been amazing. He’s started every game for Boston this year and is shooting and scoring like he never has before. Many nights, Crowder is the Celtics most consistent player on both ends of the floor. And he still hustles like he’s trying to get his first big contract. Boston locking him up after last year’s relatively short sample size was one of the best moves of the summer. And he’s locked in to one of the best deals moving forward.

3. Derrick Favors (2 years/$23 million, declines next year and then back up): In his 6th season and still just 24 years old, Favors is an incredible value for the Utah Jazz. Injuries have slowed him this year, but none of them seem likely to linger long term. Favors is an elite level PF/C talent. Once seen as a player who was just a dunker with no real moves, Favors has developed a diverse offensive game. He is still solid in the post, but has added a little bit of range each season. He’s now solid out to about 15 feet or so. He continues to be a plus rebounder and defender as well. A great fit with the rest of the Jazz young core, he’s locked in to a great deal for a player of his skill level.

2. Kyle Lowry (2 years/$24 million, last year Player Option): Lowry is an All-Star PG offering more production than a lot of his peers for $8 to $10 million less per season. At age 29, Lowry is averaging 21 PPG (career high) and over 6 APG. He’s also averaging a career high in rebounds, steals, 3 point shooting and FT shooting. He’s become the Raptors leader in every sense. They key off his swagger, confidence and drive to win. For $12 million a season, you can’t ask for more from a lead guard on one of the better teams in the Eastern Conference.

1. Khris Middleton (4 years/$55 million, last year Player Option, declines in value each year): Coming in first as the most tradeable contract is a player many considered an afterthought to start his career. Middleton was nothing special in Detroit and was a throw in for Milwaukee in the Brandon Knight/Brandon Jennings deal a few years back. The Bucks gave Middleton minutes and a regular starting role and he took off. Once seen as a good defender who may eventually be passable on offense, he’s become one of the better shooters and scorers in the league. A long 6’8’’ and able to play SG or SF, Middleton is one of the most diverse players in the league. He has become increasingly confident as a ball handler and passer, as is evident by his career high 3.9 APG. His scoring game has developed along with his ball handling. Middleton now scores confidently off the dribble, off cuts, in isolation, or spotting up and playing off his teammates. In addition, he’s only 24 years old, so there is still plenty of room for improvement. As the Bucks grow, he’ll be a huge part of their success going forward. Signed to a declining deal that pays an average of under $14 million a season, Khris Middleton is the most tradeable contract in the entire NBA.