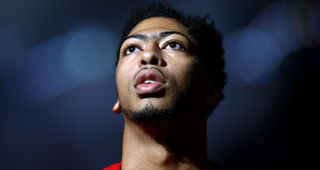 Seventy percent of lottery winners go bankrupt within a few years, a precariously similar reality facing the New Orleans Pelicans, who currently have just one player on their roster they drafted.

Fortunately that player is transcendently talented, but Anthony Davis is also fending for himself on a broken, under-talented roster producing league-wide anxiety he will waste the better years of his prime trying to salvage.

In 2012, New Orleans was one pick away from Andre Drummond and instead were left with Austin Rivers. The Blazers selected Meyers Leonard one pick later, who is the type of stretch center that would fit beside Davis infinitely better than the $75 million two-headed center of Omer Asik and Alexis Ajinca. The Pelicans didn’t have their own second rounder in 2012 as part of a 2009 trade for Marcus Thornton; that pick became Jae Crowder and the next pick was Draymond Green with Khris Middleton and Will Barton coming a few picks later.

Stephen Curry becomes MVP Stephen Curry in large part because the Warriors hit a trifecta in 2012 with Harrison Barnes, Festus Ezeli and Green. Rivers was gone by February of 2015 and the No. 6 pick in 2013 (Nerlens Noel) and No. 10 in 2014 (Elfrid Payton) became Jrue Holiday.

The eventual privilege of giving Asik a contract that would almost immediately become unmovable cost them No. 18 overall in 2015.

An alternative team without the trading of picks and without Rivers could look like this:

You can play this game with the perfection of hindsight for any team, but it highlights how the Pelicans should have been building for a deep playoff run in 2016 and perennial title contention from 2017 until Davis retires. Those scenarios of building slow and steady around draft picks also would give the Pelicans substantial cap space this offseason.

New Orleans instead snuck into the playoffs in 2015, lost four games to the Warriors and are hitting reset with nothing else to show for four years of roster construction other than Davis mercifully agreeing to an extension last summer.

Dell Demps bet his GM job and the early career of Anthony Davis on ball dominant guards in Holiday, Eric Gordon, Tyreke Evans and Rivers, along with traditional lumbering centers just as the NBA was moving toward ball movement, spacing and shooting. The Draymond Greens and Jae Crowders and Avery Bradleys the Pelicans need who can shoot three-pointers and defend multiple positions at a high level are far more difficult to acquire than the Gordons and Evans that look like they're capable of carrying a team's offense if the NBA was still playing as they were 15 years ago.

On the surface, the Pistons have used a similar strategy in trading for undervalued under-25 players like Reggie Jackson and Tobias Harris, moves that have been widely praised. But the key difference is the price cost and the fact that the Pistons also still have their eighth overall picks in 2013 and 2015 in Kentavious Caldwell-Pope and Stanley Johnson. The previous regime even traded away what became the ninth overall pick in 2014 in a cost-cutting Ben Gordon/Corey Maggette move, but Stan Van Gundy is still giving Andre Drummond plenty to work with.

Outside of the trade for Asik and subsequent contract, none of the moves are awful on their own but the lack of any complementary foundational pieces alongside Davis makes the project steeped with issues and those moves look terrible in the aggregate. The Holiday trade could have conceivably become a slightly lesser version of the James Harden trade if not for the injuries as they were getting a 23-year-old two-way guard coming off an All-Star appearance. The Pelicans have correctly identified Holiday as the player still capable of being an adequate secondary piece around Davis and considered him untouchable leading to the deadline.

The opportunity cost of Evans as a restricted free agent was minimal but acquiring him was probably overkill given who they already had on their roster.

Even the minor moves like letting Al-Farouq Aminu sign with the Mavericks in 2014 is a misstep as he’s developed a three-pointer with the Blazers and it’s easy to see that element fit perfectly beside Davis as the Pelicans shift between playing small and big with those two at the 3/4 and 4/5 without giving anything up on defense as they do with Ryan Anderson.

When Kevin Durant was in the fourth season of his career as Davis is now, the Oklahoma City Thunder had Russell Westbrook, James Harden and Serge Ibaka for teammates and were in the Western Conference Finals.

LeBron James was in The Finals in his fourth season, but Cleveland was not built around other young players in a way that predates the Pelicans. James’ best young teammates were Drew Gooden, Anderson Varejao, Daniel Gibson and a pre-breakout Shannon Brown. The Cavaliers had previously erred on the Carlos Boozer free agency, missed on Dajuan Wagner and Luke Jackson altogether and left Jason Kapono unprotected for the expansion draft to Charlotte.

The Pelicans finally own all of their future first round picks and the Ish Smith trade at least brought back a high second rounder in 2016 (Denver’s pick) and another likely high second rounder in 2017 (Philadelphia’s pick). New Orleans apparently couldn’t find a similar deal without taking back salary for Anderson, who will instead walk unencumbered to a team’s cap space this offseason without any return.

The back of the Pelicans’ roster is even filled with veterans who won’t be in the league much longer instead of developmental players. Kendrick Perkins, Toney Douglas, Alonzo Gee, Luke Babbitt and Norris Cole are all likely on their final NBA stops. The signing of Bryce Dejean-Jones was at least a move in the developmental direction, but Davis runs with more talented teammates in an H&R Block commercial these days.

As Durant, Westbrook and the Thunder are finding out now, it’s not just enough to be super talented and healthy, it takes a galaxy of talent that also fit together perfectly in which the sum of their parts are maximized these days to truly compete for a title. There’s a lot of formulas of how to build around Davis that require minimal strategic genius and the consolation of going through this now before Davis’ extension even begins is there’s time to withstand the bankruptcy and figure out how to fix it. Davis can’t become a free agent until 2020, which gives the Pelicans at least three more offseasons before his restlessness becomes a viable threat they would have to respond to by disastrously exploring trade options.

For now, Davis is putting his head down and running back on defense after too many frustrating offensive possessions on most nights, putting up a 59 & 20 on other nights and being asked to move mountains every night.