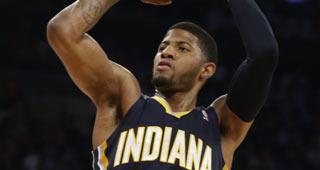 Star power holds immense value in the NBA, especially in the playoffs. Rotations shrink, implications rise and statistical outbursts are magnified. Paul George is one of the NBA’s elite and will be the catalyst if the Indiana Pacers’ upset the Toronto Raptors in the first round. The Raptors can salvage wins if their star duo of Kyle Lowry and DeMar DeRozan struggle; Indiana doesn’t have that luxury as it’s purely the Paul George show.

Through two games, George is averaging a gaudy 30.5 points, 4.0 rebounds and 2.5 steals, while shooting 54.1 percent from the field. He’s also limiting opponents to just 37.5 percent shooting from the field collectively on the defensive end.

George playing savior for the Pacers has been the norm so far with the series tied at 1-1, as the 6-9, 220-pound forward leads the team in offensive touches (64) in two games. However, George’s frequent imprint on Indiana’s possessions is warranted-as George is first among Pacers rotational players in points per touch.

With his prominent supporting cast withering away over the years (David West, Lance Stephenson, Roy Hibbert), George was expected to assume the role of Indiana’s versatile star whenever he was back healthy. George is a two-way force, but isn’t receiving the necessary assistance from some of his Indiana counterparts.

In the frontcourt, the Pacers are simply overmatched and underwhelming on both ends of the floor.

The starting tandem of Lavon Allen and Ian Mahinmi is collectively shooting just 3-of-16 from the floor. In Toronto’s 98-87 victory over Indiana in Game 2, which was more of a blowout than the score indicated, Jonas Valanciunas (23 points, 15 rebounds) decimated Mahinmi in the pick-and-roll with Kyle Lowry.

Indiana’s starting center went 0-of-6 from the field. George questionably opted to feed Mahinmi on the block, in the isolated play below, instead of taking advantage of the defensive mismatch against Lowry.

George needs to accept that he can win against a point guard and has the higher probability of scoring taking the shot than deferring to Mahinmi. Both Mahinmi and Allen are limited offensively, albeit Allen does have range on his jumper. However, George’s versatility and Myles Turner’s two-way ability gives Vogel options.

Turner has been hyper-efficient off the bench in the playoffs as he continues his excellent rookie season. In the Pacers’ 100-90 Game 1 win, Turner tallied 10 points (4-of-5 shooting from the field), five rebounds and five blocks off the bench. He was instrumental in Indiana’s fourth quarter surge, spelling Mahinmi and converting attempts (2-of-3) near the basket.

Turner’s had two-straight contests shooting 4-of-5 from the field, giving Vogel an incentive to distribute more of Allen or Mahinmi’s minutes to Turner. Valanciunas can’t continue to consistently overwhelm Indiana’s frontcourt and there’s an emerging threat in stretch-4 Patrick Patterson.

Patterson’s averaging 11.5 points and 6.0 rebounds off the bench, while shooting 9-of-11 from the field in the series. Mobility at the power forward is a necessity in handling the power forward’s range. Having George slide to the 4 and Turner handle Toronto’s centers could solve the primary concerns of Patterson firing at will from deep and Valanciunas running roughshod in the paint.

Stressing the vitality of getting help from the frontcourt, George also has to continue to operate as scorer and maintain efficiency. Even if he’s not in a favorable position to sink a shot, George’s ability to hoist and connect from anywhere on the court warrants him the green light from Vogel.

Despite only shooting 41.8 percent from the field this season, George totaled his highest true shooting percentage in his career (55.8). The aforementioned statistic stemmed from his ability to get to the free throw line at an increased rate and convert his attempts (86.0 percent). In the series, George has made his appearances to the charity stripe count, knocking down 15-of-17 (88.0 percent) of his attempts.

When he has the freedom to create and cause havoc on defenses, George is dangerous. Here, he uses a ball screen from Mahinmi to create enough space to jab step into a mid-range jumper over Valanciunas.

George is making shots from a plethora of areas on the floor and forcing Toronto to use a multitude of different players in order to contain him on the perimeter. Dwane Casey is throwing out Kyle Lowry, DeMar DeRozan, DeMarre Carroll and Norman Powell in an attempt to limit George’s ability to connect on perimeter looks.

It hasn’t panned out yet for Toronto, as George is 6-of-8 (75.0 percent) from deep and a proficient 8-of-13 (61.5 percent) from 10 feet and out. However, Toronto’s behemoths have been stout against George in the paint.

Getting help from Turner and the rest of the frontcourt will be paramount, as George won’t have to take low-efficient looks against Valanciunas or shot blocking savant Bismack Biyombo. He’s having difficulty converting over length and needs a semblance of an outlet when pressured in the low post.

George elevated his effectiveness around the basket in Game 2, boosting a 28.6 shooting percentage in Game 1 to 40.0 percent, but as the primary option on offense, he has to make the optimal read in the paint and monitor the value and efficiency of his shot attempts.

George helped the Pacers steal homecourt advantage in Game 1 and he can win certainly win another game in this series on his own, but he needs at least some help to pull the 7-2 upset.