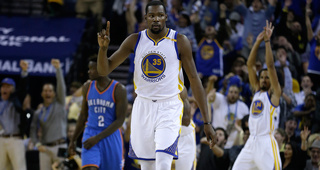 The Warriors showed up for the season with a lot to sort out. They had, you might have heard, blown a 3-1 lead in the Finals, a record-setting season down the tubes. Draymond Green capped a wild, line-stepping postseason with a meltdownish summer: a public penis picture embarrassment, a listless Olympics performance, and an ESPN the Magazine story that suggested he’s both Golden State’s emotional core and its howling id—and that not everyone in the organization is happy about that. Kevin Durant simultaneously reinforced the Warriors and dismantled their toughest rival, which was met with exasperation and anger from most of the basketball-watching public. Talent usually overcomes all else in the NBA, but not at first and not all at once. The project, we figured, would take some time to become everything it could be.

Or perhaps not: the Spurs waxed a slightly gunshy Golden State squad on opening night, and since then, the Warriors have been just about the most devastating offense the league has ever seen. Players aren’t variables you can plug into a spreadsheet, but swapping out Harrison Barnes for Durant has more or less functioned that way. Nearly all of KD’s teammates are taking a couple fewer shots per game than they did last year and Durant is scoring 27 points a night on 57 percent shooting, which is almost nine percentage points above his career average. Steph Curry, for his part, is 42.1 percent from beyond the arc while taking just a hair under 10 threes per game. Klay Thompson isn’t even playing up to his usual sweet-shooting standards yet and the Dubs are averaging 117.6 points a night. They’re probably going to be even better by the time the season wraps up. There’s no diagrammable strategy to stop them. There wasn’t one last season either, but they’ve added another MVP, so the stay-disciplined-and-hope-they-miss tactic is even less useful than it used to be.

Perhaps the most telling bit of Paul Solotaroff’s Durant profile from October isn’t a direct quote but likely a paraphrase of something Durant told Solotaroff during their time together. Durant thought of the Warriors: “these dudes play just like I do… they see the floor the way I see it.” The thing is, there’s never been much in Durant’s game to indicate that that’s true. Russell Westbrook was blamed for the your-turn, my-turn offense in Oklahoma City, but it’s not like Durant didn’t subsist on a diet of isolations and self-created jumpers. Both players were ball-stoppers and one-on-one virtuosos. Durant’s tenure in Oklahoma City wasn’t like LeBron James’s his first stint in Cleveland, semi-reluctantly carrying the scoring load while consciously tamping down on his natural inclination to set up teammates.

But Kevin Durant being as great as he is allows him some mild delusions. His assist numbers aren’t up and he does occasionally stand out among Steph and Draymond for his relative selfishness, but Durant should be selfish: he’s a dynamo, the best pure scorer of his generation. If he doesn’t contribute toward the Warriors becoming the freewheeling platonic ideal of themselves, he simply makes them better. He doesn’t see the floor precisely the way his teammates see it, in part because he has never needed to. That’s fine. It doesn’t really matter. He has what he wants, and the Warriors are pleased to have gotten what they thought they would when they signed him in the summer. You can’t win a title in November, but you can make a strong claim on it.

A lot of fan hatred boils down to a simple oppositional relationship. I don’t like this player because he always kills the team I like. That old chestnut about loving a certain kind of guy—Matthew Dellavedova, let’s say—when he plays for your team and despising him when he’s against you is broadly applicable to every athlete. Sure, style and attitude and other hard-to-parse factors matter: Dellavedova is an especially annoying presence, but, on some level, isn’t anyone who beats your team’s players to a loose ball? Endearing and aggravating are two sides of the same coin; what you see depends on whether you’re gazing from above or below.

This doesn’t mean even the most adamant partisans can’t appreciate a sport more broadly. (That they often don’t, meet me in Temecula, etc. is another issue entirely.) But some antipathies are harder to shunt to one side than others, and maybe some of them are altogether immovable. The humanist basketball fan’s take on Durant’s early success in Oakland is that we’re watching a transcendent talent self-actualize, and that’s a good thing. A certain stripe of aesthetics obsessive would argue that we’re witnessing something close to god with these newly bolstered Warriors dazzling the league to death. You can understand that these views are valid without finding yourself able subscribe to them.

Because, gosh, it is a whit spirit-sapping how easy this has been for Golden State so far. I’m reminded of a brief piece on Chloe Grace-Moretz that ran in the New York Times back in 2010. The opening grafs describe Grace-Moretz telling her representatives that she wants to do “an Angelina Jolie-type character. You know, like an action hero, woman empowerment, awesome, take-charge leading role.” Then, literally a month later she gets offered the role of Hit Girl in Kick-Ass, a critically lauded action-comedy that launches her career. She’s eleven years old when this is happens, and while she’s quite good in that movie, it’s aggravating to watch something go that well for a child. There’s no story to Grace-Moretz’s career, no struggle or redemption or self-examination, just near-instantaneous success.

Kevin Durant has at least known pain, failed in some playoff series and weathered a scary foot injury, but he joined what was already a superteam and so far it has gone as swimmingly as you’d expect. It’s difficult not to resent that, or for it to at least leave you a little cold. He made a decision and it worked out perfectly is not an interesting narrative. This, more than facile sports hatred, is why it’s defensible to root for some tribulations somewhere down Durant and the Warriors’ smooth road to contentment. You can want failure for someone else, as much as your soul can bear, but to want intrigue: you wouldn’t be a fan if you didn’t thirst for some of that.