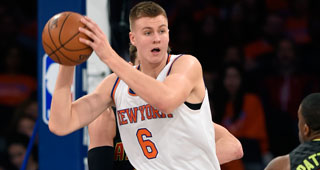 The idea of Kristaps Porzingis probably exceeds what he can actually become. Considering his talent is like approaching the crest of a hill and seeing the vast green land spread out beneath you. There’s an exceedingly slim chance he’ll populate all of it; there is simply not enough time. Plus we had been meditating on the concept of a stretch five for a while before he landed stateside two years ago—seven-foot-plus, long shadow darkening the lane, owns the glass, range out beyond the arc, glides past players his size and shoots over everybody else. Dirk Nowitzki approximated the position during stretches of his prime, but he almost always played alongside a rim protector and even when he was surprisingly quick, he wasn’t powerful. He would spin baseline and finish with a lay-in or a fadeaway. There’s a finesse and weightlessness about Dirk that’s quintessentially un-center-like, which is maybe a way of saying he was so peculiarly great at his peak that he defied categorization.

Porzingis lumbers like a five. He’s a considerably springier and more agile athlete than, say, Al Jefferson, but he still possesses a characteristically big mannish clumsiness. His most spectacular plays often look doubly spectacular for the moment in the middle of them when it looks like he might fumble the ball out of bounds or misjudge a leap and conk his head against the backboard. Where Anthony Davis inhabits his oversized body like it’s the most natural thing in the world to be seven feet tall with limbs like sunflower stalks, Porzingis fights his unwieldier frame a little bit. There’s an on-ice quality to his movement, a slight lag between when he makes a decision and when it manifests. It’s all near-misses and oh no!/oh good! with him. Or it’s mostly that, because he’s a star.

Until now, he’s played a lot of power forward for the Knicks. This is Phil Jackson’s fault, for signing a busted Joakim Noah to fill the position Porzingis was born to play, and for having outdated ideas about how many tall dudes belong on the court at the same time in the modern NBA. But Porzingis will become a full-time center eventually, whether this season under a liberated Jeff Hornacek or in the near future under someone who knows what they’re doing. Noah will become incrementally unplayable and the ever-increasing prevalence of shorter and more athletic lineups will push the giant Latvian toward his best spot on the floor, where he will fill his role not exactly like anyone else we’ve ever seen, but like we’ve imagined.

The stretch five isn’t the only position we’ve invented before there was a suitable example of one. The point forward wasn’t fully realized until LeBron James entered the league, though the moniker had been around since the mid-eighties. We still haven’t pinned down a proper definition for combo guard that isn’t scoring point guard or shooting guard who’s not a half-bad passer. Whatever it is, Gilbert Arenas’s blearily beautiful circa 2005 run with the Wizards gave the then-buzzword some genuine meaning. The stretch four used to mean Antawn Jamison—basically a power forward who wasn’t awful from the three-point range—but the concept became outmoded shortly after it came into vogue. It’s given way to the small-ball four, which isn’t really a position. It describes when Paul George is the second-tallest guy in a lineup.

As with Dirk, there are players we’ve never defined. The Russell Westbrook of a couple seasons ago and Derrick Rose during his MVP year weren’t precisely point guards. Noah, when he was playing center but also running the Bulls offense from the free throw line, was unclassifiable. There should be a name for the particular role Lamar Odom played in Phil Jackson’s Triangle, but there isn’t.

And that’s okay. This a feel thing, but basketball seems to have just about the right amount of taxonomy. The NFL is so specialized that talking about it on a technical level is traversing a jargon-swamp—nose tackles and MIKEs and split ends—and it has this awful wonky culture around it where ex-GMs and coaches sometimes use interchangeable organization-specific designations to make themselves sound more expert than they are. Soccer is the most fluid of the major team sports and thus has a lot of broadly futile nouns that seek to describe players’ roles in much narrower terms than they actually manifest on the pitch. False nines, deep-lying playmakers, destroyers: these are terms cribbed from Football Manager and too-pat tactical breakdowns that disintegrate in the translation from abstraction to real thing.

Porzingis is a tad late to his own destiny. When we were hypothesizing the stretch five back when Arvydas Sabonis was more folkloric figure than player or when Darko Milicic was sending draftniks into convulsions, the league was slower than it is now. The notion of centers as franchise players was still alive. These days the NBA is more about crafty guards and long, fleet wings than bruising leviathans. He’s only twenty-two, and too skilled not be an impactful player, but Porzingis might be the last of a breed that barely existed in the first place.

We name stuff for all sorts of reasons: to make it legible, to assume some false feeble dominion over it, to dream about what isn’t but could be. It’s not all good, or particularly useful, but it sometimes functions as a kind of preparatory measure. A strange talent like Kristaps Porzingis arrives and we have a rough handle on him right away. We even have expectations. He won’t fit neatly in the box we’ve picked out for him. He’ll disappoint and surprise. But the box itself is a way to start understanding him. And then the rest is up to him.