If The NBA Actually Figures Out An Alternative To The NCAA 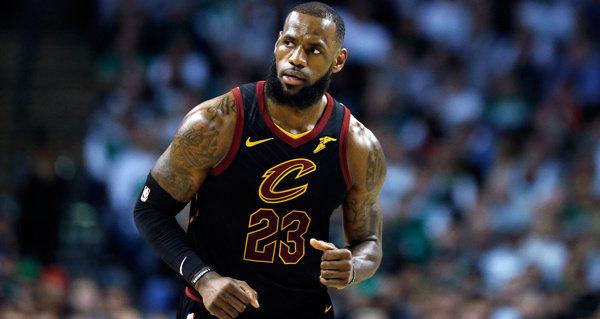 We often think of basketball as a compartmentalized industry, neatly putting the different levels of basketball -- the NBA, the NCAA, overseas leagues, et al -- into different boxes where their problems exist independently of the other branches of the sport. In reality, there is an interconnectedness between those branches that often goes unnoticed. It’s why the problems facing the NCAA over the past year have caused an NBA megastar who was never forced into the Division I basketball experience to speak out.

The point LeBron James was trying to make was rather straightforward: the NCAA makes millions off its athletes only to return a fraction of those profits in return for a “free” education. And in past decades, James’ opinion would have been in the extreme minority. But according to a Washington Post poll from this past fall, only 52 percent of Americans still feel a scholarship is adequate compensation for athletes participating in revenue generating sports (there’s also a disturbing racial divide to that poll that should prompt an entirely different conversation).

In light of the recent federal investigation enveloping the NCAA and subsequent findings that have caused issues, there’s been yet another call for reform for what is essentially the NBA’s minor league system. James was one of quite a few voices to come out saying things need to radically change. An alternative in his mind was creating a more robust G League that gave athletes an option to hone their craft somewhere outside the NCAA.

It’s an idea that certainly has merit, like a few others that have been kicked around this year. But before kicking around these ideas, it’s important to examine a fundamental flaw in the NBA’s relationship with the NCAA before move forward to finding solutions.

From the NBA’s perspective, the NCAA is just a cog in the machine, primarily acting as an entity in which the league outsources the development of potential employees. Yet in no way, shape or form is the NCAA complicit in this arrangement.

When it comes to individual programs, at the Division I level in particular, player development isn’t the goal, it is for those programs to win basketball games. And because of the money involved, it drives a certain dynamic. Assistant coaches do whatever it takes to pad their recruiting resumes in order to become head coaches. Head coaches win as many games as possible to land long, lucrative contracts from bigger schools with more resources.

Nowhere in that chain does the individual development of players for a higher level of the sport come into play. To be clear, that doesn’t mean every single NCAA coach puts themselves over a players long term future. It just means there is zero financial incentive to do so.

Coaches don’t get paid if a player develops a particular skill, learns how to perform in a certain role, or understands the more complex tactics that he will encounter in professional basketball. NCAA coaches get paid to win. Period.

Winning and development are not synonymous. Crucial skills and developmental time lost at the expense of winning. If a college coach is paid to win and needs points, he’s going to tell his star guard to shoot rather than risk losing games in order to help his player develop a skill set more suited to play alongside NBA superstars. Same thing goes for big man or wing with a shaky outside shot. It’s easier for a college coach to say “don’t shoot” rather than accept some extra losses as that player works to becoming a threat from the perimeter.

These are just a couple of examples of how winning now takes precedence over the long term good for the athlete. And that’s without getting into the thorny issue of college athletes risking mid-to-long term health setbacks in order to what’s best for their college program in the short term. Though not every college basketball player is destined to play professionally -- whether it’s in the NBA or overseas -- the setup to help the ones with a chance to do so is fundamentally broken.

So to get what advocates for change like James want, there needs to be a solution that aligns the money and agendas. So what are those options?

The idea suggested by James to make the NBA’s development league akin to be baseball’s minor league system has a lot of merit. Instead of going to college, high school athletes could immediately earn money while honing their skills as professionals. For the player, this obviously seems like a better alternative for a whole host of reasons.

It would stop players whose primarily go is to earn money playing basketball from having to deal with the charade of staying eligible for an NCAA institution -- something that has incentivized coaches to break rules in the past (for the players who seriously want to pursue a degree, the college option would be a better fit). In addition to that, players wouldn’t be subjected to NCAA practice restrictions. Put in place to stop coaches from running their players into the ground (a very valid concern and yet another separate conversation that should be had), it essentially hurts athletes driven to succeed from getting in as much extra training from a qualified coach as they see fit.

Along with a few other positives, the minor league system would be a vast improvement over what the NCAA has to offer. But given the current structure of the NBA, it still wouldn’t fully correct the money and agenda problem hindering the league’s current “farm system.”

As of now, NBA teams are only able to protect a handful of players on their G League rosters. That means not every player on a minor league deal is being developed solely for the benefit for the NBA parent club. As of now, any non-affiliated G League player can be poached by any other team in the league for no compensation -- making it difficult to prioritize doing what’s best for the development of every player on a roster. On top of that, any promising young prospect who does not meet the NBA’s current draft requirements could be selected by any team the summer he becomes eligible.

This is the same issue that would hinder the development of a true soccer-style academy. NBA franchises could effectively eliminate the controversial AAU circuit by setting up massive youth programs that are subsidized by the revenue the parent club generates. Something like this would require fundamental changes to the basketball industry, the NBA and even US child labor laws.

Because while this push for change is meant for the greater good, it’s important to remember the obvious and unforeseen effects such a drastic overhaul would have.

Whether the NBA went with a minor league system similar to baseball, or a soccer academy-style approach, one thing would be clear: the NBA draft would never be the same.

For those who have long despised the draft, this would be welcome news. There would be quite a few positive results that would immediately come from eliminating the draft or drastically reducing the high-end talent its responsible for dispersing around the league. But before anti-drafters take to the streets, it’s important to remember just how embedded the draft is in the basketball world.

By pretty much any measure, the draft is a cottage industry instead the overarching NBA business landscape. Writers, independent trainers, agents and networks, like ESPN, all have a huge stake in the draft being a meaningful event. Just compare it to soccer and baseball.

In soccer, the draft doesn’t exist. So even in England’s Premier League, the most coverage young prospects receive is when they’re pushing on the doorstep of a senior team roster. Outside of occasional lists from larger publications, not much coverage is granted to players not located within a certain proximity of the first team (basically the starting lineup). Even local papers, like the Liverpool Echo that covers both Everton and Liverpool -- two historically important clubs in the Premier League -- offer very little in terms of tracking youth development.

In baseball, there is a draft but it hardly garners much attention. The MLB draft is only carried by the league’s own cable network. In 2016, the MLB draft drew an estimated 279,000 viewers for the first day (the only day that was televised). By comparison, the 2017 NBA draft lottery -- not even the draft itself -- drew 3.2 million viewers on ESPN.

While it’s hard to tell the exact ripple effect of what would happen if the NBA draft was diminished or outright eliminated, it’s quite clear it would cause some massive changes, even to fans. For the vast majority of NBA franchises, the draft is a large part of the discussion surrounding the team. This year alone, nearly one-third of the league is going to be tanking for the top pick in the draft, something that will merit quite a lot of attention.

Other shifts wouldn't be quite as noticeable, but will be just as consequential. The more youth-based an NBA developmental system gets, the more consequences come into play. If the NBA finds a way to create a soccer style academy model, discussions about the impact of single-sport training on young athletes, the regional advantages of certain franchises, and the fallout of kids failing to progress into the professional ranks will replace the current ones we’re having now.

Despite those potential issues, it’s increasingly clear that the NCAA’s place in the basketball landscape has become a cause for concern. And thanks to voices like James, we’re beginning to create a push for change and a dialogue around new options. Yet as this public discourse unfolds, it’s crucial to remember that when it comes to a developmental system in basketball, a perfect solution doesn’t exist. But a better one certainly does.