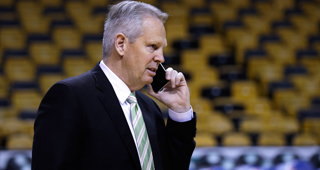 Hardship is detailed in Section 6.07 of the league’s By-Laws.

Hardship is a way for a team to go beyond the typical 15-player roster limit during the regular season for a limited time due to extreme need.

The rules are somewhat convoluted but the key concept to remember is four players and three games. The shorthand version of hardship is that teams can apply when four players have already missed at least three straight games due to injury or illness and will still not be able to play moving forward. The last part of that is important to consider, as simply missing the required time is insufficient without all of the absences extending into the future.

What makes hardship eligibility more confusing is that the three-game minimum technically only applies to the first three players but the injury/illness and continued absence elements apply to all four. As such, three players missing three-plus games and a fourth getting hurt would fit under the rule.

What happens when those requirements are met?

The team asks the league and interestingly the Commissioner has “sole discretion” on the matter. If necessary, the Commissioner can use an independent doctor to determine whether the injured and/or ill player(s) fit the rule at the time the team signs the replacement player.

Presumably, issues here would stem from whether someone was capable of returning and held out by the team, potentially to gain additional benefit from the replacement player.

What kind of contract can the replacement player sign?

The normal rules for adding players apply and hardship does not create any additional exception, so teams can use whatever means they have. That could be a 10-day contract after January 5, a non-guaranteed contract before then or something using a different exception should that be available to that team at that time.

What happens when one or more of the players comes back?

When one of the four players can return to action, the 15-player roster limit comes back into effect and the team must comply with it immediately.

What if the player signed via hardship turns out to be worth keeping?

Teams have the ability to retain the player originally signed via hardship but are still subject to the 15-player roster limit so they would have to cut or trade someone else to comply with the rules.

Will hardship change in the future?

The concept of hardship should be a part of the league moving forward since it provides a safety valve in extreme cases. Having a high threshold for eligibility reduces the chance for abuse, which could certainly become more prevalent with less strict requirements since teams are typically very aggressive at maximizing any opportunities that present themselves.

One factor that could change the process is the advent of two-way contracts. In many ways, the two parallel each other as ways for a team to have more than fifteen players available during the regular season. Since two-way contracts are more team-friendly than hardship and fit more cleanly in the organization since they are already signed and in the system, there will presumably be circumstances where franchises will just use them instead of applying for hardship. The other reason this may happen in certain circumstances is that hardship replacement players’ contracts count towards the salary cap and luxury tax while two-way players do not, which can be a significant difference for a team near or over the tax, especially for a short-term hardship.

As such, the most reasonable expectation as of now is that hardship will continue to exist in its current form or close to it but will be used less often by teams when one or more of their two-way players will suffice.

6.07. Hardship. In the event that the application of the provisions of these By-Laws pertaining to Player Lists and replacement of Players shall, in any particular case, cause extreme hardship, such provisions, upon application by the Member claiming hardship, may be waived or modified, and special rules may be invoked for the Member claiming such hardship; provided, however, that such provisions may only be waived or modified by the affirmative vote of a majority of the entire Board of Governors (the Governor representing the Member claiming hardship not voting). Notwithstanding the foregoing, in the event that a Member has three (3) Players on its Active List and/or Inactive List who are unable to perform playing services due to injury or illness and such Member has an additional Player who becomes unable to perform playing services due to injury or illness, it may substitute a Player in his stead after the following has occurred:

(b) the Commissioner’s Office has determined, through an independent physician, if necessary, that at the time the replacement Player is signed, each of the three (3) injured or ill Players on the Member’s Active and/or Inactive List, and the additional injured or ill Player, will continue to be unable to perform playing services due to injury or illness.

The Commissioner, in his sole discretion, may permit a Member to replace additional injured or ill Players on that Member’s Active List or Inactive List.