The Warriors Are Not Normal 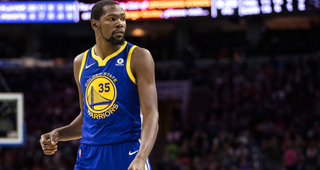 It is hard to overstate what the Golden State Warriors are. Their 73 regular season wins in the 15-16 season (a mark they came to before adding Kevin Durant to the roster) rose them to a level of excellence that has since brought them into conversations about The Greatest Teams Of All Time. The most obvious team to compare them to, in this context, are the Chicago Bulls of the 1990s, with whom they share the link of head coach Steve Kerr, then a reserve shooting guard. For the Bulls to have had the contemporary Warriors’ level of talent relative to the rest of the league, however, Shaquille O’Neal or Hakeem Olajuwon would have needed to join their roster to replace Luc Longley after they won 72 games and a title in the 95-96 season.

That would have been, in no uncertain terms, insane, and Durant joining the Warriors is just as bonkers in practice as that hypothetical is in imagination. The results of a historically effective team adding one of the best players the sport has ever seen have been anomalous to say the least. This is not normal! Durant, along with everyone else alive, is free to make whatever non-violent decision he likes, so noting the unprecedented competitive staleness that he has ushered in should not be taken as a moral assault, and (completely unnecessary) defenses of his decision and of the Warriors’ consecutive championship marches should likely re-direct their energy; you don’t need to glorify people who have hacked the rivers of glory to run into only their own homes. The spirit of self-appointed Warriors defenders, as things are, almost uniformly finds itself beefing up the same principles that scorched-earth libertarians evoke to make deregulation sound righteous.

In the case of some fans, the intersection between stanning for the Warriors and transcribing Ayn Rand may not be an accident—certainly many über-wealthy denizens of the region they play for compile a kind of wealth that fundamentally depends upon extremely unchecked capitalism. It is increasingly unfeasible to live anywhere near the Warriors without this being the case. For many Warriors lovers, though, the progressively strenuous task of building an argument that makes them seem like a normal team with any kind of historical parallel has warped their rhetoric into something they would have previously disavowed.

This is not say: “look at these idiots, becoming the thing that they hated.” Anyone who grew up loving a team would readily follow them into robust victory in whatever form it took, and anyone who didn’t grow up with these Warriors is subject to fall in love with how incredibly well they play the game of basketball. What’s curious is the consistently failing diagnoses of what the Warriors are—a goliath the likes of which we’ve never and, arguably, the likes of which no one has ever even attempted to construct—and the need within their fandom to defend their incomparable dominance against its critics.

It is okay to enjoy the victories of the stronger competitor (everyone has done this, at some point), but to follow that competitor around and tell its victims’ supporters that they are wrong to ever question the premise of their surrogate fighter, this belies a level of devotion that is bloody madness! To watch the Warriors’ ambition turn the NBA into something else (often termed, by their greatest haters, as having “ruined basketball”) and insist to the skeptics, to those still holding onto older versions of the league, that they are wrong to not like change and wrong to not appreciate this new kingdom shows a want to eradicate context.

Durant going to Golden State transformed the scope of what an NBA team can be. It has also, in the eyes of many, diminished the meaning of an NBA championship. This notion is obviously a value judgment, subject to the individual perception of anyone capable of considering notions, but what’s objectively true is that Durant and the Warriors have shown a path toward a title that is wholly new in its elision of competitive resistance. They have chosen to aggressively push the boundaries of how good a team can be. The closest comparisons we can find for this level of superteamdom involve franchises getting bargains on formerly dominant ballers who had played past their peaks; Karl Malone and Gary Payton joining the Los Angeles Lakers comes to mind, as does Charles Barkley and Scottie Pippen joining the Houston Rockets. These were small-window scenarios, narrow gambits against time that did not ultimately work. Never has such a readymade contender added such a prime time superstar, and stacked itself so much higher than the rest of the league, as the Warriors have with Durant.

The hope for the haters is that what the Warriors have done, in setting the carrot so far ahead of the rest of the pack, has not elevated only them but the breadth of what a squad can be, and in a way that anyone is able to emulate. LeBron James, fresh off two losses to the Warriors in the Finals and still miles ahead of the rest of the league as an individual talent, has an opportunity to sew together a true Warriors equivalent on the open market this summer. Such a composition would require massive sacrifice on the part of at least one major player, though, and crazy levels of managerial shrewdness, and also a ton of good luck—the Warriors have had enough of this shrewdness and luck to avoid needing too much sacrifice. Until LeBron or anyone else can replicate the intersection of fortune and malice that the Warriors have shown us, we will stay in a waiting game that has victory pre-ordained and intrigue coming far away from the court.