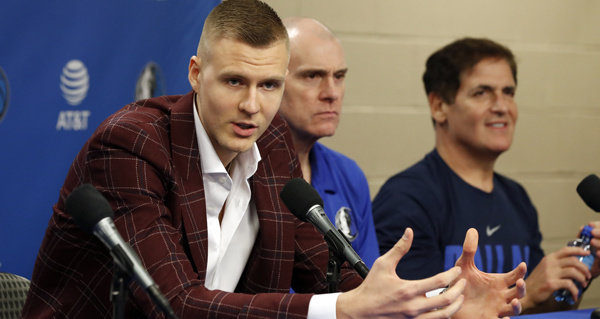 For the first time since 1999, the Dallas Mavericks are preparing for an offseason without Dirk Nowitzki on their roster for the upcoming season. Nowitzki closed out his remarkable 21-year NBA career in a farewell season with the only NBA team he ever played for. Now, the Mavs move on to a new era, one they hope will again be headlined by some European imports.

At the 2018 NBA Draft, Dallas traded up to select Luka Doncic. That trade ended up costing the Mavericks the fifth pick in that draft and what turned out to be the tenth pick in 2019. That might seem like a steep price at first glance, but it’s obviously one the Mavs would happily pay again. Doncic will win Rookie of the Year after a campaign that saw him average 21.2 points, 7.8 rebounds and 6.0 assists per game. And the best part is that Doncic didn’t even turn 20 years old until the end of February. Dallas has their post-Dirk franchise player in Doncic.

But the Mavericks then went out and got Doncic a running-mate in Kristaps Porzingis at the trade deadline. The cost was high as Dallas had to agree to absorb two years of salary for both Tim Hardaway Jr. and Courtney Lee, as well as sending two future first round picks to New York along with second-year guard Dennis Smith Jr. Once again, at first glance it seems like the Mavs might have overpaid, but if you look a little deeper, that’s really not the case.

Porzingis is a restricted free agent and is coming off missing the entirety of the 18-19 season due to a torn ACL suffered the previous season. Those two things should combine to help the Mavericks retain him at a reasonable price. With Porzingis a restricted free agent, Dallas has the right to match any offers. And the injury history could keep him short of a maximum contract. Assuming he bounces back, and all reports are that he should be fine, Porzingis will pair with Doncic for several years as a solid combination.

Even eating the contracts for Hardaway and Lee isn’t as bad as it seems. Hardaway is still a solid scorer, and he’s a good fit in Rick Carlisle’s system. Once Hardaway gets more comfortable playing with Doncic, he’ll find himself with a lot of open looks. As for Lee, he might be overpaid for a reserve guard, but he’s now on an expiring contract. He could either be moved as part of salary matching to help bring in another longer-term player. Or Lee could stick and Dallas will take the cap space after the season. Finally, giving up Smith isn’t a huge deal, because he wasn’t a great fit alongside Doncic.

Even after those deals, the Mavs weren’t done. They shed Harrison Barnes’ salary, including his $25 million player option for 19-20, in a trade with the Sacramento Kings. That deal netted Justin Jackson, who started to show signs of being a wing shooter. If nothing else, he’s on a rookie scale contract for a couple more seasons and should make for a decent backup.

Assuming the Mavs retain Porzingis to team with Doncic and the veterans, the team has some holes to fill, most notably on the defensive end of the floor. While Porzingis’ best position is probably center, Dallas isn’t going to want to subject him to that wear and tear as he works his way back. The Mavericks have already been linked to Orlando Magic pivot man Nikola Vucevic, but he’ll be expensive, and he’s not really an ideal defensive pairing with Porzingis. Instead, a cheaper, but defensive-minded option like Robin Lopez or DeWayne Dedmon makes more sense.

At the guard spot, the Mavericks need someone who can defend, but is comfortable playing off the ball, because Doncic is the primary ballhandler. Second round pick Jalen Brunson had a nice rookie year, but he’s best suited for a backup role. The ideal player in this role is Patrick Beverley. He’s used to playing off the ball from his time with the Houston Rockets and Los Angeles Clippers, and he remains a good defender. If not Beverley, than players like Darren Collison, Ricky Rubio or Cory Joseph could be solid bridge options, until the Mavs find a guard to grow with Doncic and Porzingis.

Beyond that, Dallas will likely look to retain some of their own free agents. Carlisle has a great comfort level with veterans J.J. Barea and Devin Harris, and one, if not both, will likely return. Restricted free agents Maxi Kleber and Dorian Finney-Smith were both terrific finds as undrafted players, and the Mavs would love to have both back. And Dwight Powell will probably opt in for $10.3 million, and he’ll provide some solid backup big depth.

Overall, this summer is about retaining Porzingis on as team-friendly a contract as possible, and then filling out the roster with depth. Dallas has now missed the playoffs in three straight seasons, after making the postseason in 15 of the previous 16 years. Mark Cuban has shown patience, as the team rebuilt while saying farewell to the best player in franchise history in Nowitzki. Eventually that patience will wear thin. With Doncic and Porzingis in place, it’s time for the Mavericks to begin challenging for the playoffs again.