The Sheer Lovability Of Jose Alvarado 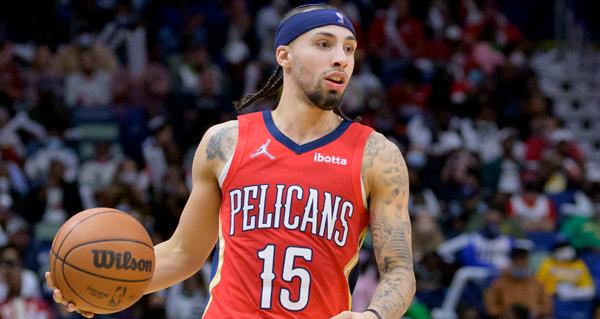 Jose Alvarado is roughly my size. If you are reading this, you might be about the same size too. We have a word for this: normal. Or, perhaps, slightly above average. It’s not a way we usually describe an NBA body, and Alvarado’s wasn’t one until recently. A four-year player at Georgia Tech, the New York native was undrafted and toiled with the G League’s Birmingham Squadron for several months after. He is exactly the kind of 6’0” irritant that lights up many a March Madness hardwood, and then better find his way into coaching or broadcasting, or really ingratiate himself into some kind of local economy of small business endorsements; because we don’t usually see these guys doing much of anything on an NBA floor.

There is, to be sure, plenty of glory to be had in the NCAA alone. As the college realm of the sport winds down its annual spectacular tournament and makes way for the NBA’s more grueling and more rewarding second season, we are reminded of how mythologically and communally potent the bracket of 64 can be. Even for some with Hall of Fame careers in the pros, like Grant Hill, there are moments in the single-elimination pressure cooker of a collegiate game in spring that cannot be culturally eclipsed by anything you might do after.

That’s all good and well, and even great, but the simple gross fact of exploitation undergirds the whole enterprise with an undeniable dark energy, and we’re here today to celebrate the big bright relief that Alvarado has gotten from that: he has been paid. An unpaid player is now a multi-millionaire. Usually we regale these young amateurs-turned-well-compensated-pros with their flowers on draft night, where everybody famously cries beside their mother and father, but Alvarado’s arc is the lesser-noticed kind. He has made his money in March, after getting the call up to the New Orleans Pelicans in January.

Through November and December, he had seen a little action, too. Alvarado just saw the floor for spotty filler time, though, averaging five minutes per game while other players were out, and usually going right back up to Birmingham. It wasn’t until he came up for good and made true waves in his hometown, at Madison Square Garden, that people really started to notice him. 2021’s ACC Defensive Player of the Year, Alvarado played his most minutes yet in the road victory against the New York Knicks, gathering four steals as the Pelicans began to turn the tide on their disastrously-started season.

Just a week removed from finding meme fame by declaring on court that “Yes, [he] can shoot,” Alvarado has been a staple in the New Orleans rotation since, and the team has all but solidified a spot in the Western Conference’s play-in tournament after looking like they had nothing to play for upon starting the year at 1-12. Averaging 17 minutes per game in the new year, he is a plus-sub sparkplug in the vein of Alex Caruso, destabilizing ball handlers and the opposing team’s general sense of basketball; never is this more true than when he does the thing he is now notorious for, hiding in the corner as a team casually inbounds the ball, and sneaking up behind point guards for the most devious steals-turned-fast-breaks that you’ve ever seen.

On offense, Alvarado can do a rare thing, too, bringing both pace and care: he averages three assists per one turnover, putting him in an elite realm of floor-running discretion. It’s not the show-stopping superhero gravitas that the injured Zion Williamson would’ve brought to the team, but it is exactly the kind of calming second-unit presence that an otherwise unmoored team can use to get their way back to sea level. Combined with how frantic he makes the other team, Alvardo’s steady hand gives the Pelicans a new edge in the liminal moments of dog-day contests.

Perhaps more important than anything that can be explained statistically, though, is the sheer lovability of the 23-year-old. Before he signed his big NBA deal, just this week, his established pro teammates Brandon Ingram and Josh Hart bought 20 tickets for him to give to friends and family for his homecoming game in Manhattan. They did the same when the team visited the Brooklyn Nets. Before the Pelicans’ front office made a multi-year commitment to him, the NBA fraternity had already opened its doors.

Alvarado’s ascendance has been a much-needed injection of wholesomeness, cheer, and straight-up love for a franchise whose status quo could have easily turned historically sour in the wake of Williamson’s injury. The point guard’s measurable impact on the floor may be only marginally positive for the Pelicans, but his presence signifies something more important, which is that good, unexpected basketball things can actually happen in New Orleans.

And for how much sunshine he brings to the situation there, there’s a wonderful contrast in how much rain he brings to the fanbases of teams playing the Pelicans. The man really knows how to ruin your day, if you’re on the other side; you’ll be shaking your first, bemoaning the heavens, wondering ruefully why fate had to manifest in this little guy’s hyper-dexterous trickery. He is a magician in plainclothes, soiling the trajectory of date night by making your food disappear right before you, and smiling while he does it. He is a classic new NBA character–a guy who, however long he is around, we will surely remember, and who we are lucky to have enter our lives.