The Nets Are A Blob Of Cultural Anxieties 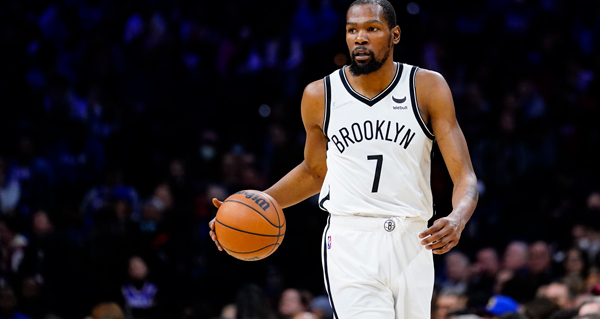 It’s difficult to write a story about the Brooklyn Nets these days. Not necessarily because of all the ethical landmines that one of their star players strews about, with the stuff he says and promotes—though these do present certain difficulty. It is more about the rate of narrative change that is normal for them. This column started as a treatise on the struggles of Ben Simmons as he returns to NBA action, but since then Kyrie Irving has had a contentious press conference about a bigoted documentary and gotten a historically unusual suspension for his doubling down on some of its ideas, the head coach has been fired, and a recently sequestered head coach from a rival team—who may or may not be a Title IX liability—has been targeted as his replacement.

By the time you read this, any number of extra dramatic developments are likely to have unfurled; fresh material for the hot winds of sports media, who are both tired of and grateful for a team that’s prodigious in its supply of insane stuff to talk about, if nothing else. Space and time constraints limit this article’s perspective to what has happened at the time of its publication, which means that some form of escalation may have already occurred, to date it. Consider this the written version of one of those podcast disclaimers, specifying up top that it was impossible for the commentary therein to include the things that happened right after it was recorded.

Let’s start with Irving, though. Really, there’s not much to say—and RealGM’s Colin McGowan already said most of it, eloquently—about the merits of his pestering, hollow ideological grenades, since said merits do not exist. It is fairly probable that Irving did not even watch the crazy-brained documentary he shared on Twitter, which includes, among other things, fantastical Hitler apologia which misspells the dictator’s first name while pretending that he was a secretly woke advocate for Black Americans. Maybe Irving just liked the provocative title. He has shown himself to be that kind of guy. In any event, nothing he said when asked about it at his infamous press conference suggests he could actually describe anything about it at much length, let alone hold a substantive conversation regarding its content.

That might change—he might get more granular about this horrible thing—but probably not. He has never spoken about worldly concerns in a detail-oriented way, and in all likelihood, Irving is being made to understand how badly he has erred, and the extent of this is being expressed to him financially; he’s without pay during his current suspension, and is a free agent next summer. If he keeps going in this direction, that won’t be a rewarding time for him. It may not be, anyway: there’s only so many franchises you can exhaust from top-to-bottom, as one man, until there aren’t any teams left to sign up for the experience themselves. Well, front offices will say to themselves, we do know that he’s one of the best ball-handlers and rim-finishers we’ve ever seen—and an excellent shooter to boot—but is it worth institutional depression, political controversy, and personal unhappiness for each of us in this room? Most organizations will decide that, no, it isn’t, especially as the man of discussion enters his thirties. Irving got off to a scintillating start on-court in his contract year, but the rest of his career will become a curious footnote if he doesn’t soon show that he can also reduce his distracting shenanigans off it, and drastically.

That is, one guesses, what Ime Udoka is supposed to be for; getting Irving and everyone else in line, as he did for a Celtics squad that looked scattered and dissatisfied this time last year. That’s not all his presence does, however. Offer a correction in the comments if it isn’t the case, but this seems to be the first time that a head coach serving a suspension for one team has ever been considered to lead a rival team, mid-season. Why exactly Udoka was banished from the Celtics’ sideline after leading his team to the Finals has yet to clarify for us much, but the vagueness surrounding his exit has never exactly felt accidental: whatever happened was something that no one in Boston wants to publicly discuss. And whenever it does get out, we will all be worse off for having to hear pundits—underqualified or wholly unqualified to get into Human Resources matters—analyze the story. Between the chatter about Irving’s long run of kooky rhetoric, and about Simmons’ mental health struggles, though, this will be nothing new for a team that has persistently inspired the worst out of everyone near it, or even speaking about it.

Sadly, this also includes Kevin Durant. For some time, it seemed almost admirable that he went to Brooklyn to seek out his wildest truth, a kind of third lease on life after shedding both his homegrown Oklahoma City Thunder self and his maximum effectiveness era with the Golden State Warriors. Here, instead, an eccentric playhouse would form in his image. But the more he has abdicated leadership responsibilities, while also making harsh demands of the front office, the result has been that of a demented dreamhouse; an expression of rough pathologies rather than of anyone’s most unique or creative tendencies.

What happens next is anyone’s guess. Most organizations cannot handle even one man who is capable of destabilizing everything going on around them, but in Durant, Simmons, Irving, and potentially Udoka as well, the Nets could have four. Perhaps their new coach is the final piece of an extremely bizarre puzzle, and a newly jilted, us-against-the-world identity emerges to take the Eastern Conference by storm. The talent is there for it, in any event. And if things did progress in that direction, we might regain the privilege of actually discussing basketball strategy when it comes to the Nets. But for now and, it appears, indefinitely, they are more a blob of cultural anxieties than a group worth talking about for what they do on the court.