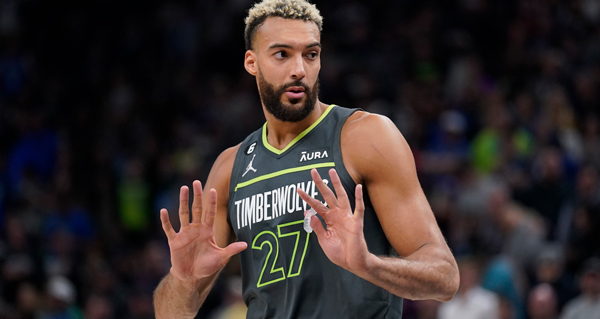 The early returns on the Rudy Gobert trade for the Minnesota Timberwolves are unequivocally discouraging. Sure, it is too early to reach a verdict on the trade: moving five first-round draft picks, a pick swap, and four players (three of whom were important contributors to the Wolves’ 2021-22 campaign, one of their best since Kevin Garnett left 15 years ago) is not something you do to experience glory in November. Come Spring, the gavel can start to hit the table much more loudly. But at this point, those looking to bang their mallets on the trade have little reason to let go.

Minnesota is 10-10. We’re a quarter into the season, and those protesting that we don’t have a juicy enough sample size to decide they’re mediocre should consider that the standings in April often look a lot like those from early December. And they would probably have a worse record if not for a soft schedule—theirs has been fifth easiest in the league, per one metric. Their offense has been below average, but looked putrid, with skeptics of the Rudy Gobert/ Karl-Anthony Towns frontcourt feasting on the frequent disastrous lowlights. Twin Towers lineups are hard to do well in 2022, and maybe impossible when one of the big men can’t dribble or shoot, as is the case with Gobert.

Perhaps if either he or Towns were a hyper-sophisticated chemist, able to manage intricate screen systems and feel teammates moving without the ball before hitting them with devilish passes, their overwhelming logistical problem could be solved with ingenuity. Neither are that, though—and their guards haven’t been all that fluid either. Anthony Edwards has looked like a child uninterested in making new friends, putting his arms up on his hips and standing motionless at the top of the key when he doesn’t like the play call. D’Angelo Russell has been himself, mostly, which is to say that sometimes he can score a lot, and he can run a pick-and-roll okay, but he is also not the answer to this sort of conundrum, and never has been.

Head coach Chris Finch, it would seem, was the mind the front office trusted to figure out this insane puzzle. But he’s not on the floor, and doesn’t seem to have a useful proxy out there either. And asking him to write a proper playbook for this group is like asking someone to beat Super Mario without a jump button. Everyone seems to know it, too: the Wolves have not exactly been tight-lipped with the media when it comes to their struggles, with Edwards complaining about the lack of space to work with, and Towns whining about Edwards’ fitness and diet. Fans have booed, and Gobert has told them to stay home.

The expectation for a 46-win team that follows their breakout season with a franchise-altering trade has to be somewhere in the vicinity of championship contention. The Wolves, right now, look like a team that will struggle to make the play-in portion of the Western Conference Playoffs. Their gambit appears to have failed—again, its fruits could still emerge later and prove otherwise, but envisioning this outcome presents a growing strain on the imagination. Going forward, Minnesota has the seventh most difficult schedule in the NBA; they will see teams much more equipped to exploit their obvious weaknesses.

The bet on jumbo-ball that the Towns/Gobert pairing represents is not unprecedented—it’s not even unfamiliar to recent years. In the 2019-20 season, the Philadelphia 76ers constructed a massive main lineup by combining Joel Embiid and Al Horford. Both are threats as shooters and creators, and thus drastically more qualified than Gobert to share a frontcourt with another true center, but neither could be maximized as a floor-spacer standing at the arc, and the lack of overall speed that their merger created made it difficult for Ben Simmons to get loose in the open court. As is the case in Minnesota, now, everyone looked unhappy with their glaring incompatibilities, and the Sixers became an unpleasant watch both tactically and emotionally.

Philadelphia, however, hadn’t exploded the foundation of their future to put this dubious roster together. They moved Horford during the following offseason, added more shooting, and improved greatly the next season as a result. They also used their 2020 first-round draft pick to take Tyrese Maxey; the Wolves’ latest pick went to the Jazz in the trade, and with it they took Walker Kessler, an immediate contributor. Minnesota will not have their first-round pick in the next draft, either (or in 2025, 2027, or 2029). They also, again, don’t have the players they sent to Utah—Jared Vanderbilt’s relentless defense and demeanor, Pat Beverley’s barking leadership, and Malik Beasley’s shooting all solved problems that this team no longer has answers for. Now, there is no near way out of what they’ve built, excepting the possibility of another massive trade.

And would that even look like? Gobert is a depressed asset after everyone’s seen how tough of an offensive fit he is outside of Quin Snyder’s system in Utah, with Russell also making more than he’s worth to most teams. Towns and Edwards were meant to be the duo everything was built around, with Gobert as their accelerator, but with the big plan failing as badly as it is, there’s no way for the team to meaningfully improve without trading one of them. It’s not something they’d do lightly, and it’s probably not even an idea they’ve yet considered with any seriousness. But the Wolves don’t have much time left to improve before it’s time to consider emergency protocol.