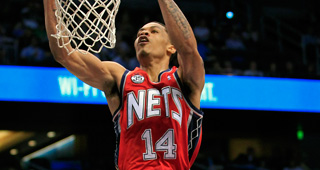 Gerald Green’s NBA career is reminiscent of a classic roller coaster ride. Green’s career has been filled with ups and downs, twists and turns, and has come full circle with a recent return to the NBA and the New Jersey Nets.

I sat down with Green one-on-one for an interview reflecting on his NBA career, playing overseas, and how he grew personally from an 18-year-old hyped teenager into a 26-year-old man both on and off the court.

The roller coaster ride began at the 2005 NBA Draft when Green, who many draft experts had at the top of most boards, fell to the 18th overall pick and the Boston Celtics. During the 2005-06 season with the Celtics, Green struggled to make the professional transition and played limited minutes. Green spent the year shuttling between the NBA and two stints in the NBA Development League. Green finished the year playing only 32 games and averaging just under 12 minutes for the Celtics.

Green explained why he felt confident to declare for the NBA Draft after high school despite a rough rookie season.

“I thought that what I did in high school was good enough to last in this league,” said Green. “I knew after the first couple of years that wasn’t the case. I knew that I needed a little bit more development and you know at the time it’s hard to develop guys when teams are just trying to win now so it was a tough situation at the time.”

In his second season with the Celtics, Green began to fulfill the potential many scouts touted. Injuries to Paul Pierce and Wally Szczerbiak gave Green an opportunity for more playing time. Green responded by averaging 10.4 points that year in 22 minutes per game for the Celtics and won the NBA Slam Dunk Contest.

Green explained how the move changed his outlook on the NBA.

Upon arriving in Minnesota, Green faced an uphill climb for playing time with a number of players on the Timberwolves that played the same position. Green’s highlight during that 07-08 season was finishing second in the NBA Slam Dunk Contest.

Also during that season, Green was traded from the Timberwolves to his hometown Houston Rockets for Kirk Snyder on February 21st. Shortly thereafter, Green was released from the Rockets on March 8th and became an unrestricted free agent searching for a new NBA home.

Green found a home with the Dallas Mavericks for the 08-09 season. Upon joining the Mavericks, Green’s agent Colin Bryant spoke highly of the move.

“We have a verbal agreement with Dallas on a one-year contract, we talked to a number of teams and there is more money out there, but this is the best situation for Gerald at this point in his career," said Bryant.

Those words proved to be wrong as Green appeared in only 38 games for the Mavericks averaging an underwhelming 10 minutes per game.

After four seasons filled with a lack of playing time and unfulfilled expectations, many NBA executives doubted Green’s ability to fulfill his potential. Some executives questioned if he was a “bust.”

With no NBA options, Green continued his professional career overseas in Russia. In December of 2009, Green signed with PBC Lokomotiv-Kuban and was waived in June of 2010.

Upon his release from Russia, Green returned to the United States hoping for a second chance in the NBA with the Los Angeles Lakers as a member of their 2010 NBA Summer League team.

Upon failing to make the Lakers final roster, Green signed with BC Krasnye Krylya in Russia.

In October of 2011, Green left Russia for China and the Foshan Dralions. Shortly thereafter Green was released from Foshan on December 2, 2011.

While sitting in the Nets locker room at Prudential Center, Green explained how his time overseas helped mold his game and him personally.

“Being overseas got my confidence up and honestly it made me a lot hungrier too,” said Green. “Having being in the league and then getting out of the league too just made me work harder and try to get back to where I am now.”

Playing overseas in Russia and China helped Green become a student of the game.

“It was good just being able to play and really work on the things that I needed to work on defensively and it’s a different game out there,” Green said. “A lot of those guys play with their mind and I learned a lot from those European guys.”

After his time overseas, Green returned to the United States a more mature player and person hoping for a second chance to return to the highest level of basketball competition, the NBA.

“It’s definitely tough moving from team to team because you kind of want to find a home, but at the same time it made me who I am today,” said Green.

On December 28, 2011 Green signed a contract with the Los Angeles D-Fenders of the NBA Development League. Green’s third stint in the D-League was the charm as he was called up by the New Jersey Nets on February 27, 2012 and was eventually signed for the remainder of the season on March 18th.

Green felt the biggest difference in his third stint was the belief of his head coach.

As we both sat across from each other in the locker room chairs, I asked Green what the second chance in the NBA with the Nets meant to him.

“Being here in New Jersey, it’s almost like a dream come true. Almost like being a rookie again because I’ve been away for so long and I wanted it and wanted it and I just never thought this opportunity would come again and you know a lot of people in life don’t get second chances,” said a smiling Green.

Even though Nets gave Green a second NBA chance, he’ll once again be guaranteed to be on the move again. This time, however, Green hopes it’s only because he’ll move with the team to Brooklyn in September.

“This is the team that gave me my first opportunity,” said Green. “I don’t see how I would want to leave this team, but you know this team has a lot of flexibility for next year and in the summer so they definitely want to fill some pieces in, but hopefully I’m one of those pieces they want to fill in. I definitely feel like this is home for me.”

Before thinking about the summer and his future destination, Green wants to go out strong and make a statement.

“I’m here today trying to prove myself again that I can play in this league and I’m not trying to go anywhere for a while,” said Green.

Currently, Green is putting up career-high numbers across the board in minutes per game, scoring, rebounding, and shooting percentages.

The Nets have also expressed interest in bringing Green back next season for an encore.