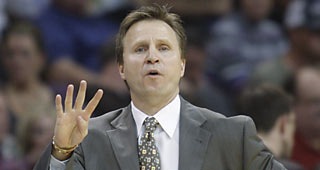 On Wednesday, as the Oklahoma City Thunder were knocked out of the playoffs, the Miami Heat moved on to their third consecutive Eastern Conference Finals. Russell Westbrook’s season-ending injury dramatically weakened Oklahoma City, but Miami did a far better job without Chris Bosh, their second most-important player, when he missed 10 playoff games last year. While the situations aren’t identical, the Heat are ultimately the measuring stick by which the Thunder should be judged. In that respect, Scott Brooks comes up woefully short in comparison to Erik Spoelstra.

Spoelstra, operating in the shadow of Pat Riley and LeBron James, has done an excellent job since losing to Dallas in the 2011 NBA Finals. Not only has he managed the egos of the Big Three, he hasn’t been afraid to alter his team’s identity in order to find the right mix. In contrast, Brooks has pounded square pegs into round holes for years, refusing to make the adjustments necessary to win a playoff series against an evenly matched team. To understand how poor a job Brooks has done in Oklahoma City recently, let’s imagine what he would have done in Spoelstra’s shoes.

If Brooks were coaching the Heat, Joel Anthony would be the starting center. Anthony, a 6’9 245 defensive specialist, was a mainstay in the Miami rotation for four seasons. An undrafted free agent who clawed his way into the NBA, he is an excellent shot-blocker whose work ethic earned the respect of everyone in the Heat organization. However, his anemic offensive game was exposed in the 2011 playoffs, where he had a 7.9 PER. Spoelstra has steadily eased him out of the rotation ever since. Anthony has played only 17 minutes this postseason, going from a starter to end of the bench player in two years.

Anthony, like many defensive-oriented centers who can’t score, is less valuable in a more perimeter-oriented NBA. Spoelstra recognized this, moving to a smaller line-up with Chris Bosh at center. Brooks, in contrast, has faithfully stuck with Kendrick Perkins for years, despite ever diminishing returns. The 2012 NBA Finals, when Perkins couldn’t defend the smaller Heat players on the perimeter or punish them on offense, should have been a wake-up call. Instead, Perkins rewarded Brooks’ faith with a -0.7 PER in this year’s playoffs, the lowest mark in NBA history.

In a bizarro world where Brooks coached Miami, Mike Bibby would still be part of his rotation. Bibby started all 20 playoff games for Miami in the first year of the Big Three. However, his playoff experience couldn’t make up for his diminishing foot-speed. In their loss to the Mavericks, Bibby was a 6’1 spot-up shooter who couldn’t stay in front of JJ Barea; getting Barea a $20 million contract was one of the best assists of his career. Bibby, now out of the NBA, isn’t much worse than Derek Fisher. Fisher hasn’t had a PER above 10.0 in four seasons, yet Brooks has consistently given him as many minutes as he can handle.

There’s a domino effect to playing Fisher so much. While Reggie Jackson barely played as a rookie, Norris Cole was given the opportunity to grow into a role in spite of his mistakes. Both were backup PG’s drafted at the end of the first-round in 2011, but Cole hasn’t had to waste time behind a guy who can’t play. In their first two seasons, Cole has played over 1,000 more minutes than Jackson, whose still getting his legs under him as an NBA player. Jackson could have an an Eric Bledsoe-like breakthrough next season, but he still would have lost playing time to Fisher if Westbrook had been healthy.

Of course, even if Brooks had been as flexible as Spoelstra, the Thunder might not have gone further in any of the last three years. A coach can only do so much; in a seven-game series, the best team almost always wins. The real concern isn’t that Oklahoma City lost to Dallas, Miami and Memphis in the last three years, but how they’ve done so. They were knocked out 4-1 all three times. That tells you the coaching staff isn’t having success making adjustments against a better opponent, probably because Brooks never makes any. When you’re down 3-1, why not alter your starting lineup? What do you have to lose?

When the Heat faced the Pacers last season, Spoelstra emptied his holster trying to survive without Bosh. He used a different starting lineup in each of the first four games, before settling on a small-ball mix that often had Battier and LeBron James defending the Indiana big men. It’s easy to forget now, but after a 94-75 drubbing in Game 3, the grand experiment in Miami looked doomed. If Spoelstra had stuck with Anthony and Bibby the same way Brooks stuck with Perkins and Fisher, the Heat would have lost. Without Bosh, their margin for error was narrow enough for poor coaching to make a difference.

If Westbrook had stayed healthy, the Thunder would have been the odds-on favorite to return to the NBA Finals. That doesn’t mean Brooks is a great playoff coach; it means having two Top 10 players in their prime makes his job a lot easier. When evaluating coaches, it’s important to be process-oriented rather than results-oriented. Brooks has consistently left points on the board in each of the last three seasons and has shown no ability to learn from his mistakes. Worst of all, his refusal to adjust his rotation reveals a potentially fatal flaw in how he evaluates players.

Whenever he’s asked about Perkins and Fisher, Brooks points to their contributions in the locker room. However, it’s nearly impossible for an unproductive player to be a team leader, especially one keeping more talented players on the bench. How can you hold others accountable if you don’t hold yourself to the same standard? Fisher and Perkins can talk about sacrifice and playing for the team, but it rings hollow when they don’t practice what they preach. James Harden, an All-NBA player, came off the bench for the Thunder. Kendrick Perkins can’t swallow his pride and do the same?

It’s one thing for a coach to not play the match-up game well; it’s another when he can’t bench a player because he’s worried about his ego. There’s a reason Spoelstra so tirelessly preaches “family” in Miami. At some point in the last three years, he’s had to ask all of his players to sacrifice either playing time or shot attempts for the good of the team. In Oklahoma City, Harden is the only player whose ever had to sacrifice. Does Westbrook need to be attempting 3.7 three-pointers a game when he shoots them at only 32 percent? That’s inefficient basketball. You can’t beat Miami playing like that.

Replacing Brooks after a 60-win regular season might seem rash and unfair, but it would hardly be unprecedented. The Pistons fired Rick Carlisle in 2003, the Bulls let go of Doug Collins in 1989 and the Lakers removed Paul Westhead in 1982. For a coach, growing a young team takes a different skill-set than getting a team through the playoff gauntlet. Sometimes, a front office has to take a PR hit for the long-term good of the franchise. The Thunder made a business decision and parted ways with Harden nine months ago. Now, they need to be just as cold-blooded with Brooks.