Who Are The Best Players On Teams That Won And Contended For Titles? (Section B) 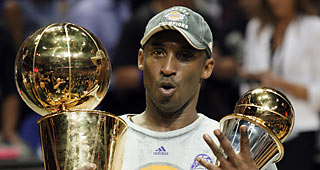 Section B: Who are the Best Players on Championship and Contending Teams?

I use the MVP vote standings and All-NBA team status, rather than my own opinion, to pick a winner in every case where possible. In most cases it was a no-brainer without even relying upon the MVP or All-NBA data. A few times data was not helpful and I had to use my own judgment, using team statistics for the season. There was one truly difficult decision: who was the best player on the 1990 Pistons? Isiah Thomas or Joe Dumars? In every respect they were almost identical. After consulting a few Pistons aficionados, I went with Isiah, but it was basically a coin toss. It has no bearing on the overall findings.

Now that we have determined who the best players have been on the NBA’s “final four” teams for the past 52 years we get to the fun part: seeing how many of these players rank on the super-elite list of superstars complied in part one. I hope you are sitting down.

Now ponder this above chart for a few moments. The implications are so striking, they approach being self-evident. Even if one quibbles with the precise accuracy of the superstar list I have complied, this is nowhere near the gray area; the results are striking, overwhelming, and undeniable.

For starters: every single NBA champion has been led by a player on this list. So if your team does not have as its best player one of these guys, or someone likely to get on the list, your chances are virtually nil.

It gets worse, or better, depending if your team has one of these guys. It is not just about winning titles; it is about getting within sniffing distance of winning titles.  All but one of the losers in the NBA Finals since 1955-56 have featured one of these superstars. (The 1970 Bullets, who lost in the Finals, had superstar Wes Unseld as their 2nd best player, and non-superstar Earl Monroe as their best player.) The exception? The 2000 Pacers. So dig this: only one of the 116 teams that have played in the NBA Finals did not have a player from the superstar list in his functional prime. There is more: Eighty percent of the 116 teams that lost in the conference finals over the past 57 years – the first two losers in the NBA’s “final four” so to speak – were led by players from this list.

And that barely begins to capture was a gated community NBA championships live in. The closer to the top of the superstar 95 list, the more likely a player is to being the best player on a championship team. The closer to the bottom of this list of superstars, the more likely the player is on the outside looking in. Fully 107 of the 116 Finals teams had at least a qualifying silver medal superstar as their best player; i.e. basically an all-time top 60 player. And if a team does not have a player is his prime from this list, or soon to be on this list, they have but a slim chance to even make the conference finals, let alone dream about playing in the finals or winning a title.

It is a merciless system weighted toward the superstar.