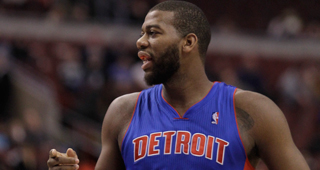 For so long over the summer, Stan Van Gundy salivated over three promising talents in the Detroit Pistons’ frontcourt, so misfit together yet so individually gifted apart, and told executives and agents: Give me this chance to make them right, a season to prove I’ll execute and complement their offensive and defensive skills. Andre Drummond. Josh Smith. Greg Monroe. Just give me the opportunity of a year, and this Pistons' franchise will survive the consequences, Van Gundy felt.

All along, Monroe never wanted to return to the Pistons and summer sign-and-trade possibilities streamed into Detroit’s front office. Van Gundy is a top-tier head coach in the NBA, proud of his system and acumen to establish a franchise. As trading Monroe became the most inviting option, Van Gundy knew the stakes, knew Monroe was likely gone after one season under his qualifying offer deal anyway.

Several NBA teams had pitched sign-and-trades scenarios to the Pistons’ front office, but Van Gundy responded with a turn-off: The president and coach requested All-Star caliber players in return, league sources told RealGM. In one instance, two other franchises had agreed to a three-team deal that needed the Pistons’ acceptance, delivering Monroe a maximum-level contract. Opposing team executives involved pushed for it. Only, Detroit rejected.

Monroe is an All-Star talent, but his trade merit across the NBA didn’t justify that value last summer. Simply, Van Gundy’s response showed he wanted these three big men again, wanted to successfully coach Drummond, Smith and Monroe and prove he could bring out production that has clearly proved imbalanced.

When the one-year qualifier was signed, Van Gundy understood Monroe would almost assuredly walk in 2015 free agency, and nothing has changed.

“There were a few teams that were serious, but that’s in the past now,” Monroe told RealGM. “The Pistons were very much within their rights to do what they did. It’s a business, so they chose to do what was best for them. Stan’s been great and his NBA track record is proven. He’s had a lot of success in this league.

“For me, I think there’ll be more freedom this time around.”

Over a dozen teams should have the necessary cap space to attract Monroe. The New York Knicks and Atlanta Hawks are two prospective suitors for the 6-foot-11 center, with the Knicks’ possibility to move onto Monroe should Marc Gasol re-sign with the Memphis Grizzlies and the Hawks already placing an interest in the offseason. Despite speculation in top markets of the Los Angeles Lakers and Boston Celtics, neither were an interested party when Monroe sought offer sheets, sources said. For now, Monroe and these Pistons have staggered to a 3-16 record and everyone is responsible.

To say Monroe has checked out on the locker room may be too harsh, but no one in his position is as fully engaged to a team, a program, as someone who sought and received a long-term contract. For Monroe, this is about being a professional, a steady producer, surviving the year healthy, and likely move on.

Across the roster, Josh Smith continues to compete, to try to buy into Van Gundy’s coaching, Drummond has taken a step back in offensive stats despite a four percent increase in usage and everywhere has been a fluctuating struggle. This team is better than needing a game against the Philadelphia 76ers on Saturday night to record four victories through 1½ months of the season.

When asked about reasons to pinpoint one crumbling season after another, about why this compiled roster and coaching staff has already fallen out of the playoff picture in the Eastern Conference, Monroe looked up to the ceiling and returned centered, shook his head and had nothing.

Monroe has tried to avoid discussion of his free agency status, sidestepping questions, and he’ll remain a pro under Van Gundy. Still, Monroe has been part of this team problem -- far under .500 and a scattered group. The Pistons haven’t won 30 or more games since Monroe’s rookie season in 2011.

“Losing wears on you, yeah, and nobody likes to lose,” Monroe told RealGM. “If you ask anyone around here if losing wears on them, they would say yes. And if you’re losing a lot and it doesn’t have a pull on you, you’re not playing the game right.”

The game of free agency is off Monroe’s mind publicly, and everyone around the Pistons and Monroe understood over the summer that this was inevitably inching toward a final run in the partnership. After Detroit deposed of two head coaches, Van Gundy so believed he would be the one for Monroe, Drummond and Smith, the man to coax a playoff contender out of ball dominant post-up players and a slashing wing.

Fine, Monroe might walk but we’d rather roll this dice and lose him for nothing than take inconsequential parts in a sign-and-trade, the Pistons’ front office believed. No trade will come on Monroe -- not with his veto power to maintain Bird Rights -- and he didn’t sign a one-year deal to delay his re-signing in Detroit. He’ll be highly valued on the available market. One more complete year together for Greg Monroe and the Pistons, moving in the direction of another lost season and an inevitable end.