How James Johnson Resurrected His NBA Career, Choosing D-League Instead Of Overseas 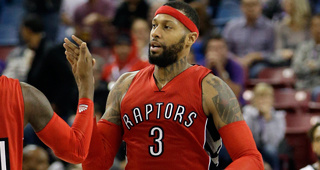 For all the nights chasing the precariousness of the NBA lifestyle, a career cratering in the league’s lowest depths, the most trying part of James Johnson’s path had been to peer into his young son’s eyes as anyone but the perfect role model, so distant from where his calling belonged. Johnson swears his son, Naymin, had fought for him so ferociously to stay alive in 2013, born weeks before scheduled, and had to ask himself: Am I testing my resolve, my persistence, for him?

All of a sudden, a former 16th overall draft pick found himself out of the NBA last year. Out of his profession, out of sight and mind. Day after day, workout after workout, Johnson could only replay events of his career, revisit situations perhaps handled poorly and quiz himself on how he’d make his name right next time around. Johnson had no pro contract a year ago, and at one point this was a most glimmering option: Uproot his family, leave the NBA and sign overseas, sources told RealGM.

Johnson considered it. What else was left here?

And so he thought: His son. There had to be another opportunity, sometime and somewhere.

“When I decided to go to the D-League, got kicked out of the league, I realized how quickly this can come and go,” Johnson told RealGM. “I wasn’t going to take it, take basketball, take life, for granted ever again. My son had a lot to do with it by him being born and me wanting to be a good role model for him – not wanting to go abroad, and instead take the D-League route.

“I heard some things, but I never looked at none of those blogs or what people say, because they’re with you when you’re doing well and then they’re against you when you’re doing bad. I just had faith, following a path. What people say in blogs … they’re just bloggers to me. Some people are really good at analysis and know their facts, but when you read, ‘He’s never going to be back in the league,’ that’s just their opinion. I’m not the type of person to be broken down.

“I knew I dug myself that hole on my own, and I wanted to get out of it on my own.”

Johnson dressed in a red sweater and blue jeans inside an empty locker room at the United Center the other night, beyond any failings with the Bulls organization that drafted him in 2009 and traded him to the Toronto Raptors nearly two years later. He was too scattered, too unrefined, to carve a role on Derrick Rose’s team back then. He could leap with anyone, but needed to better grasp defensive concepts. He required a team-defined role, not a role of expectations.

Friends still exist on these Bulls, words shared with Rose, Joakim Noah and Taj Gibson in his two games against Chicago this season, but Johnson needed to get away to ever be embraced. He has scored 16 points in each matchup with the Bulls so far, a combined 14-of-19 shooting, eight steals and six blocks. This is the role that has placed Johnson as the premiere reserve wing: Smooth flow to the offense, tenacious defense and an increased execution to swipes guarding the ball.

Looking back, the NBA’s tantalizing way of life had allowed Johnson to stray at times early in his career, and he realizes it now. He’s moved well past that point, but he understands youth in the league must learn what took him experience to pinpoint.

“The lifestyle can be crazy in this league,” Johnson told RealGM, “and sometimes as a younger kid, you can fall into it so fast, seeing what the older vets are doing. Seeing some of the traps. I just rededicated myself and stayed in my own lane.”

From out of the NBA and nearly overseas, to becoming a top contributor on a Western Conference threat last season and a guaranteed $5 million deal now, Johnson is the best case going of career resurgence. Memphis signed him last season from the Houston Rockets’ Development League affiliate, Rio Grande Valley, and that’s where he envisioned the beauty of an established system, role and environment for the first time in his career.

Houston had considered calling up Johnson multiple times a season ago, but a career comeback came with the Grizzlies. They had simply looked for a body on the wing, as Quincy Pondexter went down for the season. In short time, Johnson cemented himself as an integral part of the rotation, a speed-changer off the bench. He was a steal of a signing, and Memphis’ management knew it.

“I’ve learned that it’s more of the coaching and the system that you go to,” Johnson says. “In Memphis, I wasn’t just the defensive stopper. I was the guy coming off the bench and scoring, making passes, coming off screens, coming off pick and rolls. Here with the Raptors, it’s defense and opportunity scoring. It’s just different roles that I’ve adapted to. I never doubted myself and I believed in the path I was on. I knew the talents that I was blessed with. I just had to meet God halfway.”

A year ago, Johnson had to travel for workouts, efforts a month before NBA training camp to get in somewhere. Executives had perceived him as a marginal part after the finish to the 2012-13 season with the Sacramento Kings, so he had no choice but to accept these platforms. He had to showcase himself for as much as a non-guaranteed deal.

And here Johnson was in July free agency over this past summer, the one answering requests for meetings with the Raptors, Rockets, Grizzlies and Utah Jazz. “It was a blessed feeling to go from trying to make a roster, no one chasing you, to people actually wanting you and bidding for you,” he says.

Before the Raptors offered him a two-year deal, Masai Ujiri and his staff studied Johnson’s performances with the Grizzlies. They needed precise reasonings to this career turnaround, and so Ujiri even pulled up footage from Johnson’s first stint with the Raptors. Statistically, Johnson had played the best basketball of his career that year in Toronto, but its new front office found why all the efficiency and impact numbers indicated a new, improved and polished player.

“James is playing a role now,” Ujiri told RealGM. “Then, they maybe tried to make him more prominent. Defensively, he’s got quick feet and quick hands. We have studied him a lot and we wanted a big defensive player in free agency. He’s playing a specific role now and fitting well in that role.”

When Johnson examines his year with the franchise from 2011 to 2012, he remembers dispersed approaches. There was a lack of role acceptance, of sacrifices, as he saw players trust in each other and in coaches over the last two years.

“The first stint I was here, we were losing so it didn’t matter to guys,” Johnson says. “Everyone was just out there playing basketball, trying to fight for victories. Now that we have a winning organization, a winning GM, it’s easy to buy into your role and be part of something bigger than you.”

Johnson has seen so many players come and go on his past teams, maturity never arriving for some. He needed to grow up, and now he has younger players waiting for him to team busses and team events. For months last year, Johnson had his NBA career in jeopardy, circumstances he never had to explain to his young son and yet still felt obligated to answer to him one way or another.

As Johnson says now, “That’s when it clicked for me … after that season with the Kings in 2013, and my son being born that March, things changed for me. Big time. I knew that I had to do something. I had to think for someone more than myself.”

It wasn’t long ago that he was out of sight in the league. Once his son fought to stay alive, to stay in his life, Johnson wanted to repay him. It wouldn’t come from going overseas; only unearthing himself from where he had sunk, the D-League. James Johnson has made a full resurrection as a man, a complete career restoration in the process.