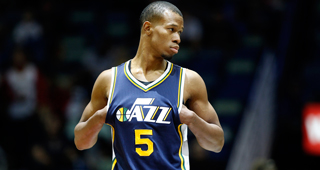 Is Rodney Hood the next James Harden? The question is too deep, fatuous and impossible to process only 100 games into the Jazz guard’s blooming career—and the answer is probably “no”—but let’s consider the similarities anyway.

Both are left-handed craftsmen with unselfish basketball tendencies ingrained in their DNA. Both are fearless shotmakers, with range, who’re comfortable attacking off a live dribble, either to set a teammate up or create an efficient opportunity for themselves.

While parts of their statistical makeup are indistinguishable—only six healthy players league wide have had a higher percentage of their two-point buckets assisted this season (minimum 20 minutes), and one is Harden—Houston’s star is already one of the most effective and efficient weapons of his generation, and no player in the league had more points heading into the All-Star break—including Stephen Curry.

Hood isn’t quite ready to carry an elite NBA offense—and he doesn’t draw fouls or pass quite like Harden could in his second season with Oklahoma City—but this year his impact has been undeniably positive, averaging 19.0 points per game on 45.0/42.6/90.3 shooting splits from New Year’s Eve to Valentine’s Day. Utah is 5.1 points per 100 possessions better on offense with Hood on the floor, the team’s highest individual difference.

But, along with every sophomore in NBA history, there are several areas of his game that still need to improve. And, in the spirit of maintaining as many parallels to Harden as possible, Hood’s defense is a problem.

Not having the foot speed to stay in front of a player who entered the league when Hood was 10 years old is a problem, but even worse is his awareness off the ball.

Instead of staying home on his man, Gary Harris, in the corner, for some inexplicable reason Hood jabs up at Joffrey Lauvergne even though Derrick Favors has him covered. The Nuggets make him pay:

On/off numbers can hardly encapsulate any individual’s entire impact. That being said, the Jazz are brutal on defense with Hood on the floor, allowing 5.9 more points per 100 possessions—the same gap between the league’s second and 20th-ranked units. Even though Utah’s normal starting lineup, with Hood at the two, allows only 95.6 points per 100 possessions, his individual defense needs to improve.

If over the summer, Utah believes Hood (who, by the way, is three inches taller than Harden) can someday thrive as its primary option and lead creator, general manager Dennis Lindsey may consider flipping the more expensive Gordon Hayward before he hits free agency in 2017 for a package that nicely complements the team’s short and long-term timeline. (The Boston Celtics are forever interested in making something happen, and have enough assets to make it worthwhile.)

Maybe the Jazz follow that up by heavily pursuing a 28-year-old Mike Conley (who’s quietly posting the highest assist rate and lowest turnover percentage of his career right now) in free agency this summer? Accomplishing any of this isn’t easy or certain, but that string of movement could potentially turn Utah into a force today, with a higher ceiling tomorrow. The biggest variable, sitting at the center of it all, is Hood. So much hinges on him continuing the ascent we’ve seen this season.

Right now, Hood ranks seventh among all shooting guards in Offensive Real Plus-Minus, higher than C.J. McCollum, Dwyane Wade, Nicolas Batum, Andrew Wiggins and Bradley Beal. He’s one of the most efficient pick-and-roll scorers in the league and leads his draft class in Win Shares. Hood drives to the basket more often than Kevin Durant and Kawhi Leonard, and is averaging over 20 more touches per game this year than last.

But how much better can he get? He’s a 23-year-old sophomore. That isn’t young, and when you look around the league and compare him with peers who’ve added way more NBA miles at the same age—Enes Kanter, Bismack Biyombo, Tobias Harris and Kyrie Irving are all 23-year-olds who’re already on their second contract—it tempers expectations just a tiny bit. (For what it’s worth, Harden made his first All-Star team at 23, in his fourth season.)

But wait, what if that line of thinking is totally wrong? What if Hood still has plenty of potential in his game? Here’s a small list of 23-year-old second-year players who dramatically improved as they foraged into their careers: Draymond Green, Damian Lillard, Jimmy Butler, Ty Lawson, Isaiah Thomas, Goran Dragic, Jae Crowder, Will Barton and J.J. Redick.

Five of those players are All-Stars. None had much expected from them after their first two years in the league. Their upside was overlooked. Hood could be in the same boat, and appears to be growing by the day.

The rapid development of Rodney Hood from utilitarian cog to budding All-Star may happen in the blink of an eye.