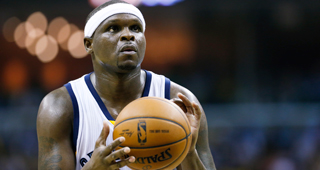 Ah, the Grizz: undefeated in the hearts of spiritual graybeards. They’re playing backwater basketball, some untouched-by-wifi setup with two big men and a bunch of wings who don’t want to shoot. It started back when pace-and-space wasn’t on the tip of everyone’s tongue, but now it qualifies as idiosyncrasy. The post-up is mostly dead, something that persists so Dwight Howard won’t pout and Kevin Love will feel included, and a guard defenses can leave along on the perimeter sticks out like a biker at the opera. The Grizz stopped making sense a while ago, which is odd to say because they haven’t dived headlong into post-positional abstraction like the Bucks or turned themselves into an asset ranch like the Sixers. They’ve gotten weird by staying the same. Or the world around them has gotten so uniformly weird that their steady sanity reads as its inverse.

There was a window, not long ago, when the Grizz could have won a title, if a still-young Thunder team had under-delivered or the Spurs had suffered an injury. This was when Z-Bo was in the best shape of his life—still about ten pounds overweight, able to leap over, hell, maybe two or three phone books—and shot that somehow unblockable fading baseline jumper with lazy grace, like he was sinking into a recliner. Marc Gasol wasn’t Pau’s chubby little brother anymore. He was turning out to be similarly difficult to check on the block and maybe an even better passer. Tony Allen was First Team All-Defense, and he would tell you about it. The squad couldn’t spread the floor then, either, but they were excellent at everything else, and they were awful to play against: dogged, smack-talking bullies. The crowds in Memphis loved them, mirrored their ornery edge from the courtsides to the nosebleeds.

It’s fitting that the Grizz’s core would descend the other side of the hill together; they’ve always played up the family angle. Z-Bo and Allen are both in their mid-30s. Gasol’s massive frame has worn itself down. He’s entered that phase seven-footers hit where they’re never totally healthy. Mike Conley could cut the figure of an unfortunate passenger, but he had his chance to leave Memphis in the summer and elected to stay. He took the front office’s money and the company they had to offer, ensuring the Grizz are sure to go lumbering on until somebody retires.

There’s no hope of a renaissance. Too many of the principals are too old. It’s been obvious for a while that the Grizz missed their brief championship window. It’s not unusual for a team to realize as much a couple years after everyone else does, but once the delusion wears off, they usually break up. The past-it vets sign cut-rate deals for title contenders and the guys in their late 20s look for a fresh start, try to wring some meaning out of the last few years of their primes. Perhaps what’s kept the Grizz together is that they’re based in a small city. Management prefers to keep familiar faces around rather than ship them out for draft picks and projects, spend a couple seasons in the lottery, and risk alienating their modest ticket base. Maybe Z-Bo, Conley, and the gang just like each other, figure it’s the Warriors’ league first, LeBron’s league second, and they don’t have a chance so they might as well enjoy more time together. No matter the reason, the Grizz are a comforting presence in a league where player movement is as fluid as it has ever been. We don’t know many NBA teams well, and it seems as soon as we get to know them, they break up. The Grizz are an old friend.

We’re living through a sophistication-obsessed era. Each successive generation fancies itself more advanced than the last, but this one in particular is riding the wave of its own enlightenment past the shore and into the town square. It’s not a little unpleasant. You can hear it in the way the commentator class compliments themselves while complimenting others’ smarts, in any conversation about strip mall eateries or Charles Barkley’s attitudes towards analytics. It’s apparent in the Unctuous Ally Olympics events that exhaust Twitter every week. A lot of this—the most annoying parts anyway; sophistication, by itself, is a good thing—is learned and cultured folks using their status as a cudgel not just against genuinely malignant ignoramuses but also decent-enough people who don’t share their sensibilities, waging pointless wars about taste and semantics in order to elevate themselves. They strain to appear in-the-know.

This is a baroque bit of self-flattery, myopia dressed up in the pretense of progressiveness. And anyway, it blows past the irony that what’s sophisticated in one age often becomes exceptionally ancient-seeming thirty years down the line. Prog-era Rush sounds beamed in from around the time the Earth cooled. The once-cutting edge CGI-core sci-fi flicks of the 80s now evoke 40s horror films in which you could see the strings holding the walking skeleton upright. Second-wave feminism scans as blinkered and quaint these days; it’s been gutted like an old home by the intersectional and queer movements.

In other words, sophistication is a fine pursuit, but it’s a flimsy thing around which to build an identity. It’s becoming obsolete second-by-second. It’s fashion: you’re going to be ugly one day, no matter how beautiful you look now.

The Grizz aren’t concerned with this. They have always been ugly. One way of putting this is they don’t get it. They signed Chandler Parsons this summer, but that makes one guy in the rotation who’s eager to shoot threes. Another way to put it is they get it on a different level: they know timelessness is as simple as existing outside time. There’s hustling to keep out in front of the trends, and there’s not moving at all. There’s cutting a seam in time by standing still, like a boulder that makes the river flow around it. The Grizz, in their twilight, are refining a style that was never en vogue anyway, and they stand out for their insular, particular way of doing things. Tony Allen doesn’t know what year it is, but he’s going to destroy you.