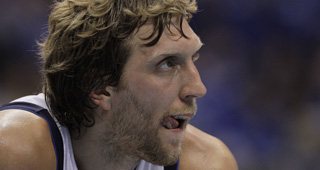 You take profundity wherever you can get it, but you don’t expect to discover it in a Wikipedia section heading. The internet’s favored source of information you need to double-check isn’t something a middle school prankster made up organizes Dirk Nowitzki’s NBA career into three phases: Difficult Start (1998-99), Big Three (1999-2004) and Franchise Player (2004-present). Putting to one side that no sane observer has ever compared the Dirk-Finley-Nash trident to Bird, Parish and McHale, there isn’t a more succinct way to explain Dirk’s sustained greatness than Franchise Player (2004-present).

Here’s a longer explanation: Dirk made his fourth All-NBA team in 2004 and his 12th in 2012. He won the MVP in 2007 and was the lone star on a title-winner in 2011. He’s 38, can barely move, and still scores efficiently, functions as the Mavericks’ offensive hub for stretches, and creates late-game buckets out of nothing. Over the past five seasons, he’s averaged 19.3 points, 6.4 rebounds, and 2.2 assists per game with a true shooting percentage of 57.1. He’s been so good for so long that he’s graduated into that Dunancesque stratosphere where no one expects him to suffer a sharp decline until he shows us it’s possible. There’s a decent chance he’s going to retire having had a single bad season: his rookie year, when he was 20.

No one gets effusive praise quite like an all-timer who’s a little bit past it. Circa 2009 Kobe wasn’t at his peak, but he wasted his prime on the mediocre Lakers squads that resulted from him running Shaq out of town. He had everything back then, but it was employed in the pursuit of lottery trips and early playoff exits. By the time Pau Gasol arrived and the Lakers were competing for titles again, Kobe was off-brand late MJ: still dominant, but he’d ceded the best player alive title to LeBron and wasn’t as springy or agile as he was in his mid-20s. What we appreciated about him wasn’t incandescence so much as polish. His footwork in the post and along the baseline was masterful and when he pump-faked, it was like he was pressing the jump button on his defender’s controller. Young Kobe was buoyant. Middle-Aged Kobe was heavy. He made the game almost as difficult for himself as he did for opponents.

There are other examples. Knicks fans loved Patrick Ewing best when he had lost a step and was heroically wringing himself out for Pat Riley. The first half of Kareem’s career was more productive, but the second half was more critically acclaimed. Chris Paul’s esteem in the eyes of the pure point guardery-obsessed rises year over year as his deteriorating knees force him to lean increasingly on craftiness and economical movement.

Once upon a time, Dirk was quick for a seven-footer. In a league that wasn’t yet broadly populated by hyper-athletic big men, he was a massive problem for power forwards and centers who couldn’t stay in front of him and small forwards he could easily shoot over. He scored, not just out of the high post, but from everywhere. He drove from wing, sent opponents stumbling paintward, and drained pull-ups. He had an array of spins and up-and-unders around the basket. He shot threes off the dribble. He’s responsible for an entire generation of failed European lottery picks who weren’t nearly as complete as he was. Consider this: Dirk was drafted in 1999, and we’re just now, with Kristaps Porzingis, seeing another similarly skilled, Sequoia-sized foreigner who might be able to approximate the German’s game.

It’s been five or six years since Dirk exited his prime and his career began its slow, beautiful sunset. Most great players in their late 30s are haunted by their past selves. They go to a move that used to be a standby and dribble the ball off their foot, they try to explode toward the rim and can muster only a meager hop. Their decrepitness and deteriorating skills are made more pathetic by our memories of what they used to be able to do. There’s some dopeyness to Dirk these days because of how slow and ground-bound he is, but this iteration of him is more inspirational than disappointing. He’s riffing on the classics, finding new ways to get to old spots: hitches and feints and no-lift fadeaways. The improbability of what he does with what he has left is staggering.

Dirk signed a gold watch contract this past summer, a $50 million two-year deal that scans as a thank you for past performance and an apology from Mark Cuban, who broke up a championship Mavericks squad, then never assembled anything like a new one. Nearing 40 and retirement, Dirk is going to play out this last spell in relative obscurity for well-coached but underpowered teams that might not even make the playoffs. There’s a sad element to this, but anyone who understands how remarkable it is that he still has so much flair and fire this deep into his career will appreciate his work as remarkable no matter the context. We don’t get much of what he’s giving us, and we almost never get it for this long. For as long as his old man brilliance persists, Dirk deserves our effusiveness.