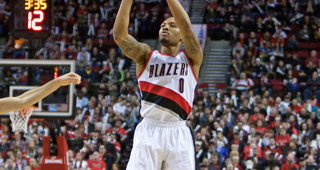 Dame Lillard doesn’t need to talk. He is of course entitled to and he does, at length, with a polish that probably indicates a genuine goodness within him but also suggests he has memorized a bullet-pointed list of dos and don’ts disseminated by the Blazers’ public relations staff. There are few players in the league more well-liked by on-deadline reporters who need a usable full-sentence quote. Beyond that, there is his comportment. He looks you in the eye when he talks to you, tells you in plain language, if not what he thinks, what he could plausibly think. He gives definition to vague concepts like professionalism and toughness. He’s a born leader, no excuses, doesn’t back down, role model, nose to the grindstone, chip on his shoulder, etc. He has a side career as a rapper, but he doesn’t curse.

All of this is fine: admirably, commendably, effortfully boring. Let it be said that Dame Lillard is excellent at appealing to those who prefer their athletes to be responsibility-takers and Nice Young Men. For the rest of us there is, thank heavens, the audacious and profane way he plays basketball, which is more interesting on an 8-for-24 night than anything he has ever uttered in public. If his off-court persona is practiced and word-perfectly inoffensive, his game is its shadowy inverse: flashy, improvisational, angry.

We’ve seen players like Dame before—highly skilled, scores from all over, 25-foot range, doesn’t defend worth a damn—but what sets him apart from his peers is his immediacy. Kyrie Irving, for instance, has a dancerly quality to him and he lofts jumpers languidly, like he’s yawning and getting an idea in the same moment. Dame is all here! oh no! quickly! now! He creates chaos then surfs along the top of it. He sometimes seems, as he crosses over to begin a drive, that he has sent himself the wrong way, but he’s so adept at getting out of trouble and into a decent shot that it hardly matters. He rarely makes what he does look easy. His singular talent is revealing the impossible as merely very difficult, and the very difficult as something he can accomplish with regularity.

It’s a minor bummer that someone who performs so brashly and joyfully speaks to the media in a freshman senator’s tone, but professional athletes are always better at their craft than anything else. The ugly side of this is illuminated by someone like Greg Hardy, who used to be a gifted pass-rusher and is currently still an awful person, but even Muhammad Ali the Activist couldn’t quite stand up to Muhammad Ali the Boxer. We spend a lot of time these days consuming players as public figures—opinionators about police brutality and restaurants, elections and movies; as style icons; as friends and colleagues and brand ambassadors—to the point that what they do on the court or the field occasionally becomes secondary, despite the fact we wouldn’t care about whatever else they were up to if they couldn’t dribble the ball like it was magnetized to their fingertips.

Some of this positively affects social change—Colin Kaepernick at least gets people talking—and some of it is nonsense and, regardless, our fascination with it starts from an honest place. We want to know more about these folks who excite us with their talent. But the end product of that is inevitably us straining to find what’s remarkable about extracurricular stuff that’s pretty uninspiring. LeBron James endorsed Hillary Clinton for President a couple weeks ago. It spawned a whole mess of chatter, because the content-maw must be fed, but did it truly shock anyone or reveal anything about LeBron we didn’t already know? Did it do any good?

There’s a lot about Dame Lillard that stands out. The Blazers could have collapsed last season. The air tends to go out of teams after they lose a player of LaMarcus Aldridge’s caliber, but Dame wouldn’t let it happen. He shouldered a heavier scoring load, took more shots and earned more free throws. Perhaps most importantly, he didn’t use Aldridge’s absence as an excuse to become a chucker. He could have pulled rank and marginalized C.J. McCollum if he had wanted to, but Dame was smart enough to understand the team would be better off if he occasionally receded into the background as a spot-up shooter and let McCollum work. Dame helped a squad that started the season 15-and-24 become the best they could possibly be. By the time they crashed out of the playoffs in the second round against Golden State, they had achieved something significant even in failure.

It’s worth noting that Dame lost his way in that final series. He put up a bunch of points, but he had more bravery than sense. He wanted so badly to vanquish Steph Curry that he adopted a counterproductive strategy that involved far too many contested threes and doomed attempts at double-team splits. Hardly any of Dame’s peers would try what he did, and literally none of them would have succeeded. He erred in his approach, but even when Dame screws up, it’s due to the outsize belief in himself that’s made him what he is.

All of this is legible and spectacular without Dame Lillard saying a word. The composed press conference personality, the naval academy graduate demeanor, the bromides about commitment to winning and accountability are nice but also beside the point, whether they ring true to you or scan as a facade. Most athletes make a strong argument for fans skipping past the parts of their lives that don’t involve them wearing a jersey. Dame aims to be different but doesn’t get there. You could pay attention only to his basketball and you wouldn’t miss much. But the basketball itself and the swaggering fury he plays it with: those things are special and worth celebrating.